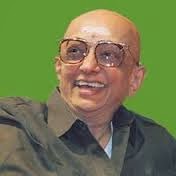 Tamil Cinema has taravelled on several tracks and has celebrated a galaxy of themes and styles of narration.There have been actors of all kinds enriching the fundamentals of Tamil cinema as an effective medium of entertainment.However,in promoting the satirical tone of narration there has been only one film personality who is greatly esteemed as a creative and critical expert in the line of Girish Karnard in Kannada.That is the most experienced, multi faceted Cho Ramasamy,the noted Tamil playwright,actor,comedian, prolific commentator and bold critic of political and social foibles.It is his pragmatic vision and poignant element of satire that has made his performance very interesting in all the activities mentioned above.As this blog is confined to films I am constrained to restrict my focus on Cho as a film maker and actor.
When compared to his contemporary comedian Nagesh,Cho's participation on the big screen was not voluminous.But in whichever film he appeared either in isolation or being teamed up with other comedians like Nagesh and Thengai Srinivasan, Cho's contribution would stand apart as a factor motivating audience intelligence and analytic mindset along with humour.This he would pass on, through an assertive element of satire with an aggressive component of caricaturing individuals and social systems, embedded with untenable loopholes.In this regard, his main target would be the political whims and fancies filled with inherent follies, looking for instant and permanent remedies.
Cho's exclusive cleverness lies in giving contextual twists to any dialogue that would ultimately end up in taking a dig at individuals or groups.He would see to it that he cracks spontaneous and timely jokes at the expense of others  and make the audience enjoy his verbal dig.Though Tamil film comedy has never been lacking in verbal force and humour,Cho's additional score would always be the satirical thrust infused in words mostly genial in content and at times pungent in tone if the situation warranted.
If Nagesh was closer to MGR in the earlier years of his career,Cho began to find a place in the later films of MGR.Some of the popular films of MGR that included Cho's comedy flair were Sange Muzhangu,Adimaipenn, Maattukkaara Velan, En Annan and Engal Thangam.The same way he enjoyed equal amount of confidence with Sivaji Ganeasan in films like Paar Magale Paar,Gowravam, Galaattaa Kalyaanam,Thangapadhakkam,,Nirai Kudam,Thavapudhalvan, and Anbaithedi,The last three were from the Mukta Films'production house and it is a known fact that Cho was a regular addition in the films of Mukta.V.Srinivasan.The fact that Cho was the most valued comedian in other Mukta Films' movies like Thein Mazhai,Ninaivil Ninraval,Aayiram Poi  Bommalaattam and Sooriyakanthi, showed the amount of rapport he had with that film company.In Thein Mazhai and Ninaivil Ninraval his comedy scenes with Nagesh became the talking point.
Cho has worked with all great heroes like MGR, Sivaji Ganesan,Gemini Ganesan,Jai Shankar, Ravichandran Kamalahasan and Rajinikanth.Cho's  association with the Superstar appears to be stronger than with Kamalahasan and  the number of films he has worked with Rajini would be an evidence of this fact.His comedy scenes in Guru Sishyan, Manidhan and Adhisiappiravi created a lot of fun .As Visithiraguptan in Adhisiappiravi,Cho led the audience to wonderful moments of laughter. Besides these films his character in Rajini's Aaarilirundhu Arubadhuvarai was of special significance.
If Cho had just been another actor, his popularity yardsticks would have been confined to the celluloid world.But he has established his position rather unshakably as a film maker and exuberant writer with an exemplary critical frame of mind.Some of his stage plays that were made into films like Mohamadbin Tuklaq,Yarukkum Vetkamillai,Unmaye Un Vilai Enna and Mr.Sampath speak of his trade marks of satire and social perceptions.Particularly,the film Unmae Un Vilai Enna was thought provoking.Besides these he wrote the dialogues for the famous thriller film Neelagiri Express released in 1967,in which he gave a sterling performance as an innocent guy, with a flair for comedy and commonsense.Cho definitely deserves a special place as a film personality, because of his variety in focus and versatility in  execution of his creative capabilities.Very few actors have set the audience to think,by their contribution on and off the screen,like Cho Ramasamy.
Cho's egg like eyes and the vibration in his usually excited voice, are his special attractions.His sense of humour and comedy fundamentals have always remained perfectly decent.Vulgarity would be the last thing he would ever resort to, in generating laughter.The vibe of his satirical tone is enough to kindle laughter and set the audience to thinking aloud.As a Tamil movie comedian Cho will always occupy a distinct position and his space with his singular voice of satire will ever remain incomparable.
=================0=================
Posted by chandran at 5:33 AM No comments: