The Twirled Moustache of Thamizha.

Aadhi known as Hip hop Thamizha in his twenties, has ventured upon a rap mixed genre of music with Tamil words bearing the Afro American musical notes, in association with his musical mate Jeeva. Flying his alien musical wings from behind the scenes he has now flown into the fairy land of Tamil cinema,After making some soundtrack contribution to films like Aranmanai,Aambala and Thani Oruvan,Aadhi has now come to display his versatile skills in acting ,composing music and dialogues and in direction through his debut film Meesaya Murukku,under the production of Sundar C, the multi faceted Tamil film personality.
Films on School and College life, with their inherent attributes of ragging, friendship and calf love are there in plenty, as part of the variety component of Tamil Cinema.There were trend setting films on these aspects such as Late Balu Mahendra's Azhiyadha Kolangal and Thangar Pachan's Pallikoodam showing the vagaries of adolescence in different dimensions.Tamil cinema's entries on college campuses, are so numerous, that it would be quite a lot to talk about.Similarly movies on career aspirations have made indelible impressions through Vikraman's Pudhu Vasandham and Ajith's Mugavari.So this almost autobiographical film entry of Aadhi cannot be expected to make wonders with the audience.
But still it makes wonders on one count.The courage of a man who is yet to see his thirties to take up the onus of too many tasks of film making on his shoulders and making his first project a watchable show, doing visible justice to all the tasks he has taken up. make the film a wonderful outcome.The most awesome thing is the impression he gives, as if he has acted in a dozen films and knows his job by the tip of his fingers.Each generation wants to do something different or at least do the same thing differently.Hip hop Aadhi hardly fails to deliver the relevant emotions in all the scenes.His dialogue delivery is absolutely natural and he dances at ease.His musical scores create the intended effect and his focus on the humor element of the film successfully takes the film on the humor track.So Aadhi succeeds both as an actor and film maker.
The next positive aspect of the film is the role of Vivek as the father of Aadhi. From a Comedian Vivek has transformed into a character actor in the line of K.A.Thangavelu and Nagesh.The last time I fully enjoyed his comedy show was in Danush starring Uthama Puthiran.In Radha Mohan's Brindhavanam he appeared as himself and delivered a character role mixed up with humor. Vivek is one of my pet comedians and I do enjoy seeing him in character roles of this kind and talking proudly about the grandeur of Tamil.If only Hip hop Thamizha also comes out with songs like 'Thamizhan Enroru Inamundu Thaniye Adharkor Gunamundu' ,'Thamizhukkum Amudhenru Per' and 'Thamizha Thamizhaa Naalai Un Naale',it would add more meaning to the language and the race.Perhaps Hip hop Thamizha wants to take Tamil closer to the global instinct, by mixing Tamil words with alien tunes.May be this is what the new generation expects and Aadhi has presumably felt the pulse of his generation.With these factors in mind, let us congratulate Aadhi and welcome him as another valuable addition to Tamil Cinema.
====================================

Posted by chandran at 1:32 PM No comments:

A Unique Narration of A Cop and the Gangster Story. 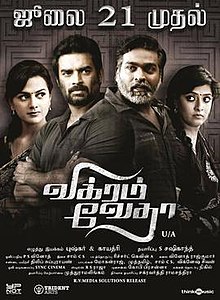 Tamil Cinema has come upon quite a few captivating cop and gangster stories that have pointedly found an immortal place in the memory gallery of the audience.The recent sparkling addition to this category of films is Vikram Vedha, with no qualms other than that of not buying his life at the cost of his self dignity. starring the smart Madhavan and the ebullient Vijay Sethupathi. This  is another special addition to Tamil Cinema on account of the niceties in narration similar to those of M.Raja's Thani Oruvan.
In Thani Oruvan, all the cops of the team were upright and  the gangster{if you want to call him so} was ravishingly charming, with no qualms other than that of not buying his life at the cost of his self dignity. Whereas in Vikram Vedha,an honest cop unknowingly carries on an encounter mission with his untrustworthy team mates, which fact is brought to his mind, only at the fine close of the movie. The narration of the film might create the impression of being on the track of Vetrimaran's Visaranai,where again an honest cop is taken for a dishonest ride by the higher ups of the uniformed service he belongs to. However the gripping tragic climax of Visaranai still stays fixed in our memory, with a single line, suggestive audio in the dark, stating "both are over"which meant both the honest cop and the innocent victim of police atrocity were done to death.
But what a natural and true- to -life portrayal of the cop that R.Madhavan comes out with.He is certainly a natural actor in the line of Kamalahasan at least to some extent.That the most fascinating chocolate boy of Alai Paayudhe and Run and the warring great guy of Seeman's Thambi does a great job as an amazing cop, takes the film to its deserving heights.From a cowardly cop in Lingusamy's Vettai, Madhavan has drastically moved on in to the role of a cop, in its neatest and most compact form ,with an absolute commitment to the police uniform {of course not wearing the uniform in any of the scenes}.
For Vijay Sethupathi, who has grown by leaps and bounds as a new wave sterling actor,the role of Vedha appears to be an easy game and his casually impressive performance is no surprise to the audience.The three contexts with three different stories narrated by Vedha to Vikram, with suitable sub headings for the stories,are the most intelligent patterns of narrative technique adopted by the director duo Pushkar-Gayatri and become a telling factor for the refreshing quality of the movie.
Both Madhavan and Vijay Sethupathi have effectively underplayed their roles and for this too, credit must be given not only to the two actors, but also to the two directors. Shraddha Srinath and Varalakshmi Sarath Kumar have convincingly contributed their might to the success of the film,by taking on very relevant female roles. one as the wife of Vikram and the other as the love interest of Vedha's younger brother Puli .The same should be said about Prem, who plays the role of the cop Sam and Kadhir, who appears as Puli,the younger brother of Vedha.
There is not much music here, nor is it needed for a film of this kind.The movie is certainly not an entertainer.But it is a perfect sample of purposeful film making and another qualitative inclusion into the archives of Tamil Cinema, that would make an eternal impact on film lovers, without sound and fury. For all this, the director duo deserve a special pat,because they have meaningfully succeeded in creating a new narrative form, to an otherwise usual cop and gangster story.
===============================================

Posted by chandran at 9:16 AM No comments:

This blog has to its credit two articles on motherhood as interpreted through character delineation in Tamil Cinema.The two articles were those that discussed the positive and formidable traits of motherhood and various artists like P.Kannaambaa,M.V.Rajammaa, G.Varalakshmi, Pandaribai, S.Varalakshmi, S.N.Lakshmi and Aachi Manorama  found their relevant place in those two articles.In recent days, another delightfully different  profile of motherhood has drawn the attention of film makers and the popular actress Saranya Ponvannan has got into this new profile, to reflect motherhood in modern dimension.It is the role of an understanding mother with a cheering and humorous attitude that has got into the creative imagination of film makers, for an appealing thrust.Interestingly, like all other previous films which mostly focused on the mothers of heroes rather than heroines,this new trend also lays its projection, only on the hero's mother, helping him out of his financial or love issues, either without the knowledge of her husband or against his interest.
Saranya is the daughter of noted Malayalam Film director A.B. Raj who has directed about 75 films.She has acted in the films of all the four South Indian languages and is known for her flair for play back singing too. Saranya who made her entry into Tamil Cinema through Mani Rathnam's stupendous film Naayagan and was paired with Kamal in that film could not find a firm footing in the industry for doing a round as heroine.But no one can deny the fact that she got back in to the Tamil big screen as an enchanting mother, making every young man  long for such a sweet mother.From Jeeva's Raam till this day, she has adorned the spirit of motherhood, with meekness and dignity with an addition of humor component.
As an energetic and understanding mother she has established a very unique position that enabled her to win a national award for her role performance in Themerku Paruvakatru. Even before this she secured another prestigious award from the Tami Nadu State Government, for her vigorous performance in Em Magan. Besides these, she has also won the Film fare award several times.
She has acted with all popular heroes and exhibited the same amount of emotional equation and compassion reflecting the mother-son affinity with utmost involvement in role play .The vast line of heroes will include  Jeeva {Raam and Thenavettu} Bharath {Em Magan and Thambikku Indha Ooru}Vijay {Sivakasi and Kuruvi}Ajith {Kireedom}Vikram[as his elder sister in Arul and then as his mother in Thaandavam}Ajith {as his mother in Kireedom}Dhanush{Thiruvilaiyaadal Aarambam Velaiyillaa Pattathaari and Kodi}Udhayanidhi Stalin {Oru Kal Oru Kannaadi}M.Sasikumar {Kutti Puli}and Siva Kaarthikeyan { in Remo}.Among these films mentioned, Saranya's humor sense took an upbeat in films like Em Magan,Oru Kal Oru Kannadi and Remo.As a mother she has revealed a sense of absolute confidence in the courage and goodness of her sons, in films like Thenavettu and Kutti Puli.
The most convincing element in her acting is the casual ease and spontaneity, with which she grasps the base of her character and makes an infallible access to the audience as a natural performer, with a right mix of  submission, warmth and self dignity, that constitute the grace and charm of womanhood and maternal grandeur.There were days when Tamil Cinema was proud of possessing at least half a dozen great women to don the role of motherhood.But today there is truly a dearth of talents to take up character roles, particularly those of maternal grandeur, with commitment and dedication.After the recent death of Manorama, there is certainly a vacuum in this specific domain of acting.No doubt Saranya fills this void both responsibly and beautifully, holding an instinctive frame of mind to embrace the supremacy of motherhood, with an extraordinary dimension of sweetness and modesty.
=====================0=======================
Posted by chandran at 10:11 AM No comments: