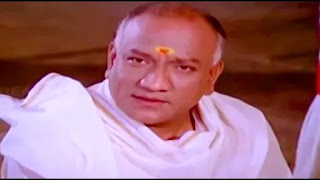 Primarily a musician and partly an actor,T.S Raghavendra had his acting career spread over a period of two decades with his remarkable entry in 1984, in the role of a frustrated father acutely anguished over his young, widowed daughter vaidhehi {Revadhi} in the mega hit film Vaidhehi Kaathirundhaal, directed by R. Sundarajan.
In that magnificent film, Raghavendra did an amazing role play as an old man desperately taken to drinking,on account of his paternal plight. His vibrant vocal cords were found felicitously supporting the immortal song ''Azhagu Malaraada" sung by S.Janaki,the high pitch heart throb of Tamil film music.It is no wonder that the richly vibrating voice of Raghavendra travelled along with the vocal grandeur of Janaki,the dynamic dance movements of Revathi and the masterly musical strokes of Ilayaraja. It was a four in one fabulous event, in that musically enchanting film.
Music and role play hardly go together these days.But Raghavendra's musical acumen and thespian talent made a symbiotic combo impact on the big screen, to an awesome extent.Today  Tamil film world has lost one of its lofty links.The exalting vocal cords have fallen with the last breath of T.S.Raghavendra. But their eternal gusto dominating  his musically embedded voice, will be cherished as an audio treasure.
This great artist has to his credit, other popular films like Sindhu Bhairavi,Vetri Vizha,  Karpoora Mullai and its Malayalam original,Chinna Thambi Periya Thambi, Anna Nagar Mudhal Theru,Solla Thudikkudhu Manasu,Harichandra {Karthik Muthuraman film}and a few others.
As far as Tamil cinema is concerned,so long 'Azhagu Malarada' song keeps echoing in the ears and memories of music lovers,his voice will be heard with the ecstasy of carnatic music and the agony of human emotions.The Muse and musical notes will ever bemoan his passing away, in perpetual melancholy mould.Let his musical soul rest in peace.
Posted by chandran at 11:21 PM