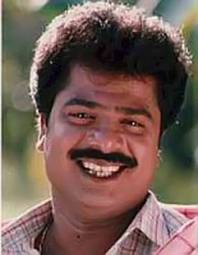 Very short in stature but never running short of talents.Both endowed with crazy looks carrying a world of mischief and width of comedy. One is T.R.Ramachandran, the ever vibrant natural comedian, who was flying his vigorous wings, from the early Forties to the late Sixties of the last millennium.The other popular film personality is the new generation director-cum actor R.Pandiarajan who has been to us to us, an every day source of warmth, willfully projecting himself, in a nincompoop's frame of mind.
I saw T.R.Ramachandran during my childhood days, only after he had acted in quite a few films and become famous by his own merits. It was in the classic comedy,'Adutha Veetuppen' he reached my imagination to rest there,for ever,as one of my pet actors on the Tamil big screen. How he conquers the heart of the feminist- oriented, music- loving girl next door, through a series of manipulated humour-filled situations,  was the interesting story line of that film.The hilarious scenes he did, in association with K.A.Thangavelu  and his wordy war with Anjalidevi, were the special attractions of that movie.The other comedy super hit film in which he acted along with Sivaji Ganesan,was Manamagan Thevai. The film showed him as the ladies' hostel warden with his usual reflection of nincompoop characteristics showing him as a great performer.His frequent bouts of a peculiar brand of serial laugh, was an added attraction of his character, in that film.
I continued to visit T.R.R on the screens, of the touring talkies and theatres in my small town.Some of the other roles that made me remember him were, his playboy role in 'Padikkadha Medhai',with scant regard for his father[played by S.V.Rengarao ] ,the villain role he did in 'Iruvar Ullam' [a Sivaji Ganesan film],and the humorous father role [as Saroja Devi's father Punnaakku Punyakodi] in 'AnbeVa'm [the only MGR movie under the AVM banner].Then came the most successful 'Saadhu Mirandal' in which he literally made everyone understand,that smallness and softness have their stronger side too and being soft should not be misconstrued as being weak.In other words, he made the maxim 'small is powerful' a living reality.
Strangely,I saw his big hits 'Sabapathi' an early forties' release and 'Vaazhkai' released in the late forties, only after his death,that too on the small screen at home.Both these movies came from the mega AVM production house and in both TRR was uniquely appealing as an actor of distinct stuff, blending humour and sobriety at equal length. It was in these two films, he struck my imagination like Pandiarajan, who became fascinating in his very first movie 'Aanpaavam' with his naive jokes.But the major point of difference between the two actors is the frequent use of broken English used by T.R.Ramachandran to show him big and the half-baked jokes of Pandiarajan to claim his supremacy.But they look almost alike, in their helpless blinks, whenever they are exposed and their wits cornered..My last visit of TRR  at the theatre was in 'Thillana Mohanaambal' as a dance assistant of Padmini and he performed it with meekness and dignity.
Pandiarajan was a striking contrast with Sivaji Ganesan and Sathyaraj in 'Muthukkal Moonru' in appearance and stature. That itself was a contributory factor to the feel of comedy in an  otherwise serious film.This small but strong actor gave us creditable movies like 'Kadhanaayagan' 'Oora Therinjukitten' 'Gopala Gopala' and 'Paati Solla Thattaadhe'.He has recently been occupying small but significant comedy portions  in films like 'Vaseegara',  'Giri  'Enga Anna'.'London' and 'Perarasu'. Pandiarajan like T.R.R, has also tried a villain role in 'Anjaathe'.As a sub-inspector of police, Pandiarajan gave a humorously vibrant role in the latest Vijay block buster 'Velaayudham''.Both TRR and Pandiarajan,as actors of unusual standing, have displayed acting stuff, that has surpassed their size and structure.They belong to different times.But they are similar men in their looks and acting styles.
====================0======================