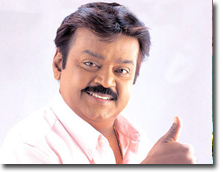 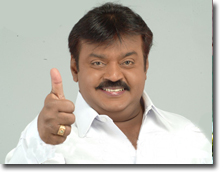 Vijayakanth is a name for magnetic victory. The spirit of the hero in Vijayakanth, is always a force to reckon with. He became a hero three decades ago, when the celluloid world was obsessed with norms of appearance and complexion, for the choice of actors doing heroes on screen. Like  Rajinikanth, Vijayakanth  should also  have faced the hurdle of fighting his complexion, for entry into the tinsel world.But unlike the Superstar, Vijayakanth did  not have a Balachander to introduce and groom him. Nor could  he stun the audience, with miraculous body language and freshness in dynamic,stylish expositions in acting,such as smoking,walking and talking differently. So the hurdles would have been more for him.But,Vijayakanth framed his own style, like every other actor and delivered his roles, with force and clarity in dialogue delivery and speed and  flow of energy in the stunt scenes. He needs a special recognition, for facing all the obstructions and surmounting them with grit to reach the position, he holds now.