The Head of Grace,Style and Charm. 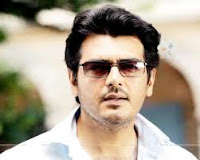 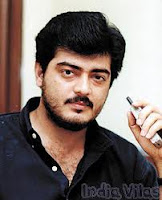 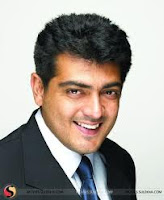 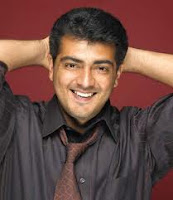 Think of a handsome hero of endearing appeal,and there comes before our mind, Ajithkumar, as the leading man of style and charm.His sweetness embedded in his lovely smiles and refined looks, makes him a hero of an exceptional nature.From his very first movie Amaravathi that introduced him as hero, he has been retaining his grace and charm as an outstanding romantic hero.No doubt Saran made him the hero of his film Kaadhal Mannan.[King of Love].The understanding between Saran and Ajith seems to have a strong base because, Ajith and Saran combination has come out with three more hits like Amarkalam, Attakasam and Asal.
Ajith's acting carries a breezy style, that is rarely noticed among his contemporaries.He has an ability to deliver dialogues in a soothing manner, creating an impact of warmth and softness. On the romantic side, he has been a creditable winner, with a variety in character delineation and an amazing reach in performance.Starting from Amaravathi, it has been a gliding journey for him through Vaanmathi, Kaadhal Kottai,Kaadhal Mannan, Ullasam,Rettai Jadai Vayasu, Aval Varuvaala, Aasai, Kandukonden Kandukonden, Amarkalam, Anandha Poongaatre, Raasi and Vaali.
Though after some time, like most other heroes,he had to be shunted to the action genre,it could not be said that he has been comfortable with action formula films or he has given hits in a series .Many talented directors, like Lingusamy [Ji] Shaji Kailas[Jana] A.R.Murugados [Deena] Maharajan [Anjaneya] P.Vasu[Paramasivam] and Perarasu [Thiruppathi],for whom action films are an easy game, could not make great hits with Ajith. Even Ajith's most cherished movie Citizen directed by Saravana Subbiah, had only a modest impact on the viewers.No one could fault the dedication and vigour of Ajith's acting in any of the movies mentioned above.May be, roles of rage and fury and forceful melodramatic characters were not in the preferred line of Ajith. It was time for him to change the track and he did change the repeated course at the right time.
Director Vijay's Kireedom, a remake of the Malayalam movie with the same title evolved Ajith's image as a subdued action hero, without pomp and undue image building, in characterization. From then on wards, one could see Ajith as an action hero of style and charm.A little before this new wave acting, Ajith's talent was beautifully utilized by Ezhil for two of his captivating love stories, Poovellam Un Vaasam and Raja. Interestingly, in both the films Ajith was paired with Jyothika as his enticing romantic pair.Of the two films, the former was in fine family mould, with the grandeur of profound intimacy between two families, passed on as a legacy of friendship, from one generation to the other, for three generations.
The other film Raja was a kind of triangular love story, emerging from a proxy wooing game played by the heroine, [played by Jyothika] who was passionately in love with the hero. Ironically, the hero began to fall for the girl who happened to represent the heroine's love interest. Another film of enduring fascination, was the beautiful family story Mugavari, showing Ajith as the most pampered member of the family by his parents and siblings, all of them vying with one another to motivate him in his chosen field of music. Ajith performed the role of an aspiring music director, with an inherent perception of the character,reflecting a passionate devotion to music, as well as an affectionate understanding of the family members, who loved him most.The movie beautifully delineated the competitive spirit of sacrifice between him and his siblings and parents. It was one of the cleanest films, in the history of Tamil Cinema.
Then came the sensational, revised version of Rajinikanth's last millennium blockbuster and the most famous Billa, in which Ajith was presented as a stylish and enchanting don.Following this, came two more films, Aegan and Saran's Asal, both giving prominence to the charming body language of Ajith. The subsequent release,Venkat Prabu's 'Mangaathaa' did a magic by picturing Ajith as a gambling police officer, ready to do anything criminal, for the sake of the lure for money.This anti hero role was delivered with consummate warmth and killing spirit of kindness.It was another suave performance of Ajith teaming up with action king Arjun. This was followed by Billa 2 as a prequel to the earlier one. Ajith continues to rule with his style and charm.
Before I conclude,a special mention has to be made about the two movies Villain and Varalaru that Ajith acted under the charismatic success maker K.S.Ravikumar. Both the films were great commercial hits and entertainers.Villain in particular carried a mass appeal with a powerful story line ,presented impressively with tempo and speed.The saddest thing is,Ajith,an actor of exquisite versatility, has not so far been accommodated by leading directors like Manirathnam and Shankar in their movies. Ajith is affectionately called 'Thala' [The Head] in film circles. However, Ajith has always been shy of popular acclaim and off- screen prominence.Even his screen image, has been deliberately kept in a low profile, because of his reluctance for blowing up an image, on the ground of publicity.But he is definitely one of the leading stars of Tamil cinema.He has the sweetness of nativity combined with the style of  a Hollywood range that puts him far ahead  of his contemporaries in terms of freshness in appeal and neatness in delivery of roles with an exemplary body language that solely belongs to him. I feel privileged to record my personal views on a highly estimable actor and publish them in the form of an article in my blog, on his birthday.
=====================0=====================