A Voice That Takes Us Along. 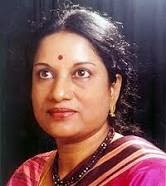 The myriad voices of film music, rule our ears in different veins. In other words, each one of us takes a fancy to the singing voices, based on our likes and dislikes.Some times, a few numbers and tunes take us closer to the singer.We have sweet melodious voices,possessing voices,high pitched voices,clarion voices, yearning voices and those that are sharp and scintillating.Tamil  film music is a magnificent mix of a galaxy of top ranking singers.Of these, one stands out as a sharp,sweet and captivating singer with a pulling control in her voice and that is none other than Vani Jeyaram.
The special charm in Vani Jeyaram's voice is that of an all pervading sense of longing and hidden element of sorrow, that one could genuinely feel as well, in the mind blowing male voice of the noted Hindi playback singer Mukesh.
Take for instance her two most popular numbers, sung in her nascent days, for the film Aboorva Raagangal of K.Balachander.The most meritorious 'Yezhu Swaranagalukkul Ethanai Paadal' and Kelviyin Nayagane endhan kelvikku padhiledhayya' from that film, were beautifully dipped in the stream of sorrow and they captured our emotions through a process of gripping and tightening tone control.If S.Janaki is well known for her predominantly high pitched voice,it is the sharpness and clarity in the voice of Vani Jeyaram that would take us along.
Most of the solo numbers like 'Malligai En Mannan Mayangum'{Dheerga Sumangali},'Naane Naanaa Yaarodhaanaa'{Azhage Unnai Aaraadhikkirein}'En Kalyana Vaiboham Unnoduthaan' {Azhage Unnai Aaradhikkirein} and the differently sung 'Nitham Nitham Nellusoru'{Mullum Malarum},to mention a few,were historic hits of this amazing singer whose voice calibre was specially known for travelling deeper into the aesthetic layers of music enjoyment.For that matter her duet songs sung particularly with K.J.Yesudas stand equal testimony to her ability to pull the human ears into a delightful listening experience.Some of the musical hits in this respect are 'Andhamaanai  Paarungal Azhagu' 'Ninaivale Silai seidhu'{ both from Andhaman Kadhali} 'Gangai Yamunai Ingudhan Sangamam'{Imayam} and 'Thangathil Mugameduthu' {Meenava Nanban}.Her other felicitous duets were with S.P.B and the most reverberating ones are Ilakkanam Maarudho{Nizhal Nijamagiradhu}'Ore Naal Unai Naan'{Ilamai Oonjaladugiradhu}and 'Barathi Kannamma'{Ninaithale Inikkum}.With Jeyachandran her immortal number is 'Inraikku Ein Indha Anandhamo' from Vaidhehi Kathirundhal.
During the Nineteen Seventies and Eighties it was Vani Jeyaram's songs that were frequent award winners bringing pride both to Tamil and Telugu Cinema.She had a very bold voice frame capable of creating the intended impact through a casual play of her vocal cords without manipulation of any kind.Most of her songs were of the 'Hear Again'category and beyond all the ecstasy of carnatic music that she was capable of,it was a voice with a categorical winning effect by simply taking the music lovers on an exotic journey along with her singing core.In this regard,she always remained unbeatable,through out her film  music career .
==================0=================
Posted by chandran at 11:40 PM No comments:

Telugu Film industry holds the proudest position among others,in contributing its best to Indian Cinema, both in terms of number of films and extensive quality enrichment, in all spheres of creativity on the film front.Aesthetic sense,impressive narration,appealing characterization,variety of theme focus and exotic action bonanza have always remained the special attributes of Tollywood.Telugu film makers have the special mark of making mythological movies with precision,divine thrust and amazing power of music.Even during times of inadequate technical advancement it was Telugu Film fraternity that effectively introduced trick shots fabulously devised by its technical crew. My childhood days in particular, abounded in visiting touring talkies for watching Telugu films dubbed in Tamil.It fed my imagination with lot of matters of myth and reality.Actors born with a perfect face for playing gods on screen, excellently captivated my childhood fancy.To mention a few names, veteran actors like N.T.Rama Rao, Kanta Rao and A.Nageswara Rao rightly filled the bill when it came to making a film on a divine subject.Of the three, N.T.Rama Rao became synonymous of Lord Krishna and Rama.But the third name in the list, stood closer to the Tamil audience, more by playing characters for family and social themes and stories with charm and grace, than for myths.The fact that he is no more today,after a vastly spread film career,definitely creates a void not to be filled by anyone including his most popular actor son Nagarjuna.
Not many Telugu films of A.Nageswara Rao were either dubbed or remade in Tamil.But the small number stays stronger in my memory not because of the films but because of the actor. I always felt this immortal Telugu hero is similar to our great Chevalier Sivaji Ganesan in making a grandiose impact on the viewers by perfect observance of performance norms with spontaneity and dedication in doing roles of different kinds with genuineness and understanding of character intricacies.I would say Devadas was the magnum opus of this magnificent actor.He made the character strike at the root of every one's emotion with the pang of a love lorn romantic youth.
It was a character evolved through Platonic perceptions and in no way did Nageswara Rao deviate from the Platonic formula in role delineation.Devadas became a home name and no one remembered the actor.So natural was the pass over of the character base from the actor to the character that the character outlives the actor even today, thereby making the hero gain permanence by not projecting his hero image into the character that he played.
Enga Veettu Mahalakshmi and Manithan Maaravillai were two fascinating family stories that would perpetually celebrate the memories of this astounding actor.Both these films carried a lot of scope for humour and the hero did not seem to require the help of a comedian to support the humour base.Nageswara Rao was one of those who could comfortably generate humour without losing his grip over a sobre situation.It was always a great pleasure to watch him being teamed up with heroines like Savithri and Jamuna.If it were an amicable wife he would be an understanding husband.If the spouse were a pampered woman he knew how to tame her.Family was a jolly ride for him and in the role of an endearing husband, he would excel without stooping to the level of an uxorious or henpecked husband.The other Tamil films of A.Nageswara Rao that I saw were Manjal Magimai, Maadharkula Manickam and Kalyana Parisu.The first two were again,fine family dramas and in Kalyana Parisu his role was minimal to appear in the climax as the bridegroom of the heroine who was the victim of  sacrifice of a deep love,helplessly given up for the sake of her elder sister who was also in love with the same man. Even here,Nageswara Rao was shown as a very friendly, understanding and decent man with a lot of respect for his wife. Thooya Ullam was a film of Nageswararao that I missed.
It is of course a small space that A.Nageswara Rao shared with Tamil Cinema.But small is always beautiful.Dignity grace and sobriety were the yardsticks of A.Nageswara Rao as an actor.One could always remember him as some one closer to their hearts with warmth and unrelenting quest for aesthetics in acting.I had never seen him overdo the role, unless it was warranted by emotional contexts of histrionics.He essayed breezily the characters assigned to him and his dialogue delivery was soft and smooth;he sailed through emotions like a brook or a gliding star and never as a turbulent storm or fierce waterfall.He filled my imagination as an exalting,decent actor and my memories of him in this regard, will ever remain indelible, despite the fact that he is no more today.
======================0=========================
Posted by chandran at 7:26 PM No comments: