The Classical Trinity of Music, in Movie Mode. 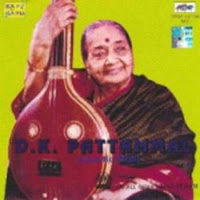 Posted by chandran at 2:38 PM No comments:

Among the popular themes meant for emphatic narration through the film medium, male chauvinism has been as much in focus as feminism.Tamil cinema has projected the power of feminism both vociferously and vibrantly through several films like Penn,Pudhumai Penn,Vaazhvu En Pakkam,Vaazndhu Kaatukirein and the most recent 36 Vayadhinile. In the same manner,ever since the beginning of Tamil cinema, the negative factors of male chauvinism have also been significantly and substantially portrayed as the evil face of men casting a blot on the mirrors of the family and society.The face of the male chauvinist might be that of the villain or even the hero.But cinematic imagination has never failed to expose its deplorable sight,both in long and closeup shots.
The moment one thinks of the male chauvinist in Tamil Cinema,there appears the ruthless face of M.R.Radha either as a domineering,or as an ill-treating husband.How naturally he performed the role of a reckless wastrel and wayward husband, showing brutal indifference to the feelings of his wife, in films like Nalla Idathu Sambandham and Ratha Kanneer. Both Sowcar Janaki and Sriranjini,were found to be mere puppets in the hands of this masculine warlord.Rudeness became the synonym of Radha,in these films and he essayed these roles with a devil-may-care attitude and an itch for debauchery.
Was it not the role of a powerful male chauvinist that he portrayed in K.S.Gopalakrishnan's most critically reviewed film Sithi?As the father of grown up children as well as a kid in that film,Radha was looking for a second wife,after the death of his first wife and brazenly married the socially disadvantaged Padmini,just for the sake of fulfilling his sexual desires.It was one of the most dynamic films of Radha and confidently did he expose the ugly face of the male chauvinist. Padmini would plead with him to escape from his chauvinistic moves and hardly would he ever budge to her pleading. As a dominating husband and wife beater, Radha was always invincible.
Next to M.R.Radha it was the Chevalier Sivaji Ganesan, who tried to assert male superiority in quite a few films like Motor Sundarampillai,Paar Magale Paar,Baratha Vilas and Dheiva Magan.In all these films it was the impact of wealth coupled with the arrogance of being the male, that brought out the effective inner layers of his characterization.However, in Sivaji Ganesan's display of male chauvinism,one could always notice an inherent weakness of the ultimate surrender of the male to a kind of emotional cauldron, that would purify the character of the male and  evolve it into a form of dignified manhood.
In other words what Sivaji Ganesan would largely portray as the male chauvinist, was a kind of male pride strutting and fretting and finally hitting the ground realities,through a reforming late realization.Most of the characters he played in family dramas,were those of a male patriarch, with the majesty of heading the family tree,with its roots of gentle and soft emotions ultimately getting warmed up,to a strengthening family bond.In this respect,Sivaji Ganesan's Male Chauvinist roles never failed to stamp their positive image of the hierarchic and esteemed position of the male,as the head of the family. Such a spirit of patriarchal supremacy was vibrantly reflected in the role delivery of great actors like S.V.Rengarao and S.V.Subbiah.
R.Muthuraman,the close contemporary and intimate fellow actor of Sivaji Ganesan,also poignantly demonstrated the element of male chauvinism, by his inspiring performance in films like Veettukku Veedu,Dheivam,Sooriya Kandhi,Sondham and Raman Ethanai Ramanadi.Dheerga Sumangali was another film in which his character beautifully combined the traits of an uxorious and chauvinistic husband.As a dynamic, chauvinistic husband Muthuraman's roles always travelled between the male supremacy of Sivaji Ganesan and the male arrogance of M.R.Radha.
Rajinikanth was seen as a repulsively erring male chauvinist in films like Thappu Thaalangal and Gayathri.Vijayakanth did such oppressive characters in films like Naane Raaja Naane Mandhiri and Amman Koil Kizhakkaale.But excepting Gayatri, in the other three movies the heroes were made to realize their negative inner self and set positive goals for a new lease of life. In Gayatri, it was the role of a confirmed, nasty villain that Rajinikanth played, indulging in a trade of  wife- selling.
The present trends are very much against the male chauvinist.The male would not be shown as undermining the rightful claims of the female, in any field, at the cost self esteem of the female.Characters such as misogynists, sadistic males and the Casanovas, come and go on the big screen,on a selective basis.But in a civilized world, heading towards gender equality norms,feminism appears to be a more acceptable term than male chauvinism.Hence male chauvinism is doubtlessly becoming an old theme in cinema,though in real life, male chauvinists still do exist as vocally,as feminists.
==================================
Posted by chandran at 5:00 PM 2 comments:

A Brief time Hero of Buoyancy and Style. 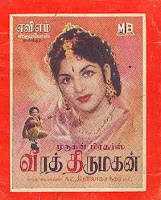 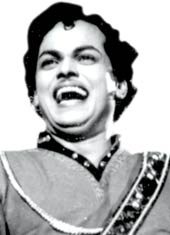 Tamil Cinema was once dominated by a small group of heroes staying strong for a longer period with lasting fame and fan base.The list could be easily bifurcated as first line and second line heroes.The first position was held by MGR and Sivaji Ganesan for a quarter century to be joined later by Jai Shankar and Ravichandran.While S.S.Rajendran and Gemini Ganesan held the second place during the period of the former,Sivakumar held the second position with Jaishankar and Ravichandran. Muthuraman was the second level hero,both during days of MGR/Sivaji Ganesan and Jai Shankar/ Ravichandran.
But these second level heroes also gave quite a lot of hit films as main heroes,with quality and richness in presentation.The only difference was in the fan base and the large scale audience support that went with the first level heroes.Otherwise, all these heroes had their unquestionable individual positions in the film industry and they also remained busy throughout their film career.However, most of these actors could not be said to have commanded the Tamil film industry, as MGR and Sivaji Ganesan did.
During those decades of restrictive scope for an acceptable hero,there came in the early Sixties a brand new hero of style, charm and appeal,as a refreshing breeze.In appearance,costume sense and presentation, he was a trend setting hero showing his dynamic skill in fencing,horse riding and sprightly portrayal of character.That was the most impressive C.L Anandan,who unfortunately had his brief stint as hero and was soon pushed to villain and character roles.
After doing supportive roles in films like 'Thandhai' and 'Senkottai Singam',C.L Anandan was born as a fascinating agile hero,in Citadel Films''Vijayapuri Veeran', directed by Joseph Thaliath Jr.The film became an instant hit,because of Anandan's new appeal in body language,hairstyle,costume fitness and the speed he exhibited in horse riding and fencing.For those who were watching all the while,the unique show of MGR in royal costumes and his nimble display of mounting on horses and sword swirling,Anandan dawned on the big screen,with a new wave of dynamism. 'Vijayapuri Veeran'became a box office blast and gave immense promise of a new arrival into Tamil Cinema.
Unfortunately, the next two films'Rathinapuri Ilavarasi'and'Kongu Naattu Thangam'did not continue the starting magic spell of the new hero,because both the films were moderate shows.Then came the most memorable 'Veera Thiruman' from the AVM banner. With this film A.C.Thirulokchander who wrote the story for 'Vijayapuri Veeran' became a director, to continue his journey in film making for a couple decades, giving us many great films with Sivaji Ganesan as his chosen hero.
Anandan regained momentum and the movie became a special treat, with the scintillating music of Viswanathan Ramamurthi. Songs like 'Roja Malare Rajakumari' and 'Padaatha Paatellaam Paadavandhal' in the voices of P.B. Srinivas,P. Suseela and S. Janaki are still making rounds, soothing our ears with their  eternal  musical richness.The song 'Vethalapotta Pathini  Ponnu' rendered by TMS with a group of added voices,set a new trend in group song composition. Anandan paired with Kumari Chachu, took the film to its expected romantic heights with charm and grace.The film firmly got fixed in audience frenzy and found a lasting place in the archives of Tamil Cinema.
After this film there was another period of lull because the nearly half a dozen films of Anandan that followed 'Veera Thirumagan' did not do any miracle at the theaters. Films like 'Sengamala Theevu','Neeyaa Naanaa','Kubera Theevu','Kaattu Maina', 'Naanum Manidhan Thaan' and 'Magale Un Samathu' were mere additions of numbers into Tamil Cinema.Soon this small time hero of style and charm, was sidelined and was compelled to move to character or villain roles.As his stout body form was fitter for villain roles, he did more villain roles or that of a villain's henchman .He had acted in Jai Shankar's films 'Yaar Nee','Ponnu Maappile''Athai Magal','Manasaatchi' and 'CID Shankar'.
He also appeared in Ravichandran's'Edhirigal Jaakiradhai' 'Ninaivil Ninraval' ,'Naangu Killaadikal' and'Moonrezhuthu' Interestingly, Ananadan who initially appeared to be an alternative for MGR in royal roles, was found to play either villain or character roles in MGR films like'Thani Piravi' and 'Neerum Neruppum.' Later Anandan also appeared in Rajinikanth films such as 'Naan Potta Savaal' 'Thanikkaattu Raja' and 'Adutha Varisu'. He also appeared in a character role in Vijayakanth's 'Sendhoora Poove'.Action King Arjun's'Thaaimel Aanai' was the last film of this small time hero.
Be it a hero or villain or character actor,C.L Anandan hardly failed to stamp his image as an exclusive actor of style and charm.His sharp looks,alluring smile,awesome speed and lively delivery of roles, never failed to make indelible impressions.This exceptional actor would ever stay strong in the memories of those, who had a chance to see him as hero on the silver screen.
Posted by chandran at 3:25 PM No comments: