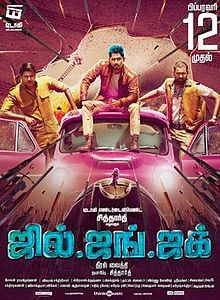 First of all  actor Siddharth deserves a pat for taking a film without a heroine.The film directed by Deeraj Vaidy is more a road comedy dipped in black mode in an adventure ambiance.It has three friends Jil Jung and Juk, matching three villains viz Deivanayagam {Amarendran}Rolex Rawther {Radha Ravi}and Attack Albert {Sai Dheena}.Nasser makes a brief appearance as Jil's dad and stays stuck in our minds as the  vibrantly deceptive gambling father, grooming his son for all foul games with his inimitable style of acting.The widely expected ''Shoot the Kuruvi'' song comes only at the close of the film, leaving the audience to choose to watch it or leave the theatre.There  is no story as such.It seems to be a mix up of Michael Madanakamarajan and Jiggirdhanda.There are crude villains there are a couple of scenes showing murders too.Siddharth most often bears a morose look with his beard adding up to his moroseness.The comedy element if there is seriously any, dies at the theatre not to be taken to the mortuary for a post mortem.A few double meaning dialogues are also there.On the whole the film is not boring though nothing is there to call back to the memory lane.There is a dryness prevailing through out the film.Is it due to the amateurish kind of narration or the confusion of the director to fix it in one genre of narration say, a full length road comedy or a black comedy or a farcical demonstration ?Or perhaps the absence of a heroine has cost it its deserving appeal?
Posted by chandran at 10:30 AM No comments:

An Ace Tamil Film Director of a Quarter Century{.Posted Again as Homage to A.C.Thirulokchandar}.

There were more than half a dozen film makers who made Tamil Cinema proud,during the Nineteen Sixties and Seventies,by their creative excellence through a number of worthy and beautiful films.This Blog has already recorded with great appreciation, the remarkable contribution of directors like A.Bhimsingh,A.P.Nagarajan,Krishnan Panju, K.S.Gopala krishnan, A.C.Thirulokchandar P.Madhavan and K.Balachander through its publication of many articles either collectively or independently on them, in different contexts.Of these,A.C.Thirulokchandar occupies a unique place for bringing out a vast variety of films in genres like historical fiction, family drama, romance, comedy and action with emotionally light and heavy events and characters.
A.C.Thirulokchandar started his directorial venture under the big AVM banner, with the most successful film Veerathirumagan celebrating the musical grandeur of Viswanathan and Ramamurthy and the fascinating historical element pictured magnificently through a catchy narration of events Actors like C.L.Anandan,S.A.Asokan Kumari Sachu,E.V.Saroja and others made a grand show of their performance to make the film a big hit.With this film this director's association with AVM studios grew stronger and he directed a huge list of renowned films, riveted to the memory of the audience.
Of these Anbe Vaa needs a special mention because it was the only movie of MGR under the AVM banner and it was also the only film of MGR that A.C.Thirulokchandar directed.Similarly Adhe Kangal was a thriller cum action film from the AVM banner.Both these films were wonderful entertainers with the beautiful blending of comedy,romance and action. Anbevaa was a little more breezy in narration but both the films were highly acclaimed for their rich music quotient. Films like Naanum Oru Penn and Ramu were extraordinary family stories gracefully narrated with the amazing performance of actors like S.S.Rajendran,Gemini Ganesan, S.V.Rengarao,V.Nagaiah,Vijayakumari and K.R.Vijaya. Both the films demonstrated the emotional strength and nobility of womanhood.
Beyond all these outstanding list of films what made A.C.Thirulokchander stand firmly to the ground of his career was his right understanding of Sivaji Ganesan's profound perceptions of acting and the right way he made use of that colossal actor for a leading show of his films.In other words it was the intimate, creative relationship between Thirulokchandar and Sivaji Ganesan that enabled the former to dedicate a major portion of his career towards exhibiting what Sivaji Ganesan was worthy of as an actor of legendary stuff.It was an emotional parade that Sivaji Ganesan made under the stewardship of Thirulokchander for more than two decades.
Starting from his first film Thangai,produced by the Sujatha Cine Arts Production house of K.Balaji, Thirulokchandar went on to make nearly twenty films with Sivaji Ganesan.Their combined show of unforgettable films were,Thangai,Thirudan,En Thambi, Enga Maamaa, Iru Malargal, Bharatha Vilas, Engirundho Vandhaal, Dheiva Magan,Babu,Pilot Prem Nath,Ennaipol Oruvan, Dharmam Enge Dr.Siva,Anbe Aaruyire and Avanthaan Manidhan,His last film with Sivaji Ganesan was Anbulla Appa another AVM release.Most of them were also the best films of Sivaji Ganesan putting his heart and soul to the role he performed.Almost half of them were silver jubilee hits too.
There were a few memorable non-Sivaji films like Panjavarnakili,Sondham,Deergasumangali Badrakaali and Aval that travelled through the memory lanes of every body, depositing precious emotions and dignified attitudes towards human relationship, particularly between spouses.Excepting the last two,K.R.Vijaya played the female lead in all the other films symbolizing either wifely or womanly devotion to the better half.Both Badrakali and Dheerkasungali transmitted the pang of sorrow depicting a tragic note.While Dheerga Sumangali rejoiced over the incomparable state of conjugal harmony,Badrakaali was the sum total of a woman being a replica of divine strength. It was really unfortunate that Rani Chandra who played the female lead in Badrakali, died in an accident, during the time of release of the film.
Sondam was a vibrant family drama with a lot of positive energy reflected by K.R.Vijaya as the passionate wife of a  rude and wayward husband,played by Muthuraman.Pramila who played the second heroine demonstrated her great strength of acting in doing her best, to reform the hero.All the five films listed here, showed Thirulochandar's dynamism and power of understanding of human emotions and family relationship. Aval which was a Tamil remake of the Hindi blockbuster Doraha,sharply focused on the plight of a woman/wife raped by her husband's trusted friend. Strangely, actor Sasikumar who did the role of the husband of Vennira Aadai Nirmala,[the heroine of the film] in Aval, also died in a fire accident later.These films, along with the Sivaji Ganesan masterpieces, truly enriched the quality of Tamil Cinema.
What was special about Thirulochandar's direction was his remarkable thrust on a variety of human emotions and the impact of vibration those emotions would transpire.When it comes to depiction of the tragic core or intensity of grief, this director would ever stay unsurpassed.Some would call it melodramatic;but for many viewers those were events on the big screen, capable of inspiring,melting and mellowing the mood of the audience in the best manner possible.It would look as if the film watching experience was one of the audience boiling in a cauldron of emotions, getting themselves ennobled, as gold gets purified in fire.Films like Iru Malargal,Engirundho Vandhaal,Dr.Shiva and Avanthaan Manidhan would effectively vindicate this most striking aspect of the creative profile of this passionate film maker..For the highly emotional audience of the Nineteen Sixties and Seventies, this was the most rewarding experience and Thirulokchandar as an ace director  presented elegantly the existing lifestyles, as he did wonderfully, for example,in Dheiva Magan. This is how he got himself imprinted in the minds of the viewers, as a maker of living models of life, in celluloid form.In his passing away, the emotional side of humanity naturally turns heavy, with unbearable grief.
====================0====================
Posted by chandran at 3:55 PM No comments: