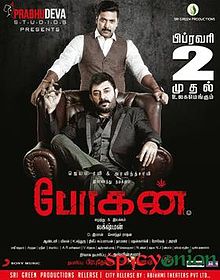 The film Thani Oruvan brought together Jeyam Ravi and Arvindsamy for a unique show on a highly refreshing story line and narration.It was a police story vibrantly told with the stylish performance of Arvindsamy and Jeyam Ravi that took the audience on unexpected tracks with a lot of twists and turns in presentation.These two heroes have teamed up again for the film Bogan,which is again a police story with Ravi doing the role of the cop and Arvindsamy the other hero with a bunch of negative shades. .
The difference with Bogan is that it begins with the introduction of the anti hero and then passes on to the exhibition of the other hero through a song sequence.Unlike Thani Oruvan which had the chief characters placed on a stable pedestal,here the two heroes stand on a fragile and flimsy base with a sudden shirk in their character display caused by the negative hero's capacity to indulge in transmigration.This leads us to the predicament of not being able to view each hero with their respective character base.This is because,after the transmigration, the positive hero's body takes negative shades and vice versa.One can very well imagine the scope for disaster if the bad spirit gets into the body of the good police officer and the undue suffering that the good spirit of the police officer undergoes, once it is transmigrated into the body of the evil man.
For some of the  audience, who are used to direct narration of events and characters, this kind of subtlety in narration is likely to cause confusion.But the best part of the film is the shift in character display by the two heroes, in their respective roles of normalcy and transition.It is astutely shown how each one gets into the other's role play and delivers the role, tightly sticking to the base of the character.It is one of the best performances of Jeyam Ravi .For Arvindsamy it appears to be a cakewalk.He is both the hero of the film Roja and the villain of the film Thani Oruvan.
On  the positive side, it should be mentioned that the director and his team of cinematographer, editor and music composer have all done a very neat job. Hansika's performance is both robust and graceful.The absence of comedy, has not affected the pace of narration of the film, because it belongs to a serious thriller-cum action genre movie.Though in terms of narration, Thani Pruvan certainly reigned high, Bogan cannot be underrated on account of the brilliant character delivery of Ravi and Arvindamy who have simultaneously undergone the ordeal of performing two characters in one role.
D.Iman's music hardly disappoints the viewers these days.But Anirudh's Aalumaa Dolumaa carried greater amount of energy than "Damaalu Dumaalu".Nassar, Naren and Ponvannan have all been quite compact in their roles.I believe Prabu Deva and Lakshman have not disappointed their audience and I am sure Ravi and Samy can team up again, for another course of transmigration as hinted at the end of the film.
Posted by chandran at 7:19 PM No comments:

Three Actors with their Metropolitan Prefixes.

Celebrities at times would like to carry the names of their native places, along with their names.We have come across this practice among politicians,Carnatic singers and musicians as well as actors.Among singers and musicians the list is quite vast.Names like Chembai Vaidhiyanadha Bhagavadhar,Semmangudi Sriniasa Aiyyar,Ariyakudi Ramanujam,Lalgudi Jeyaraman and Madhurai Mani Aiyyar, would still keep vibrating in the memory of ardent fans of carnatic music.Besides these, we have popular playback singers like Sirkazhi.S.Govindarajan,Chidambaram Jeyaraman and Tiruchi Loganathan .Lyricists like Pattukottai Kalyanasundaram,Thanjai Ramaiahdas were equally popular. Actors like Tiruchi Soundarajan, Suruli Rajan and Thalaivasal Vijay are carriers of the names of their native places.But there are three actors who have prefixed the names of metropolises along with their names.They are Delhi Ganesh,Delhi Kumar and Calcutta Viswanathan.
Among these three, the first name is the most popular, because he has been a prolific actor on the stage and on the big and small screens.Born in Tirunelveli, he took the Delhi prefix after being a significant part of the Dehi drama troupe.It was K.Balachander the peerless peak among directors who first put him on the Tamil cinema map with a breaking entry in Pattanapravesam released in 1976. From then on, he made a four decade journey through the tinsel world acting in more than 400 films besides acting in about eighteen television serials starting from Marma Dhesam, till the latest Chellame.Delhi Ganesh fits himself neatly into paternal roles, as a perfect father figure.
Aaha,Arasu, Aanandham,Saamy,Edhiri, Vettaikkaran and Thenavettu are a few outstanding samples of the numerous father roles he played.Of these Anandam will be ever remembered for his excellent role performance as the patriarch of a well knit joint family.On the comedy side, Delhi Ganesh has scored most remarkable innings in films like Michael Madhana Kamarajan,Tenali,Avvai Shanmugi and Kadhala Kadhala.Crazi Mohan's dialogues added pep to their joint show.It was a perfect combination of intelligence and comedy creating best laughter moments.With the same fervor, this great actor performed a villain role, in Kamal's Abhoorva Sagodharargal.
Even in elderly governing roles, one could see him casually mixing humor in performing his character, with interesting twists in dialogues as seen in Tamizhan. Delhi Ganesh has also frequently joined Visu's band wagon, for films like Chidambara Ragasiyam,Samsaaram Adhu Minsaaram and Patrukottai Periyappa. As a dipsomaniac he did captivating roles, in K.Balachande'r Sindhu Bhairavi and Sundar.C's London. What takes him closer to the audience as an endearing actor is his soothing,clear and impressive dialogue delivery, as a spontaneous by product of acting.Perhaps it is his stage sense that has made him deliver dialogues with utmost comfort and ease..
Metti Oli Serial fame Delhi Kumar known as 'Television father' has meaningfully occupied the small screen taking up dignified paternal roles in other equally famous serials like Chithi,Anandam, Mudhanai Mudichu and the on going Thalayanai Pookkal. His first appearance in Tamil Cinema was for Dum Dum Dum directed by R.Kannan of the Mani Rathnam school of film making.He gave an unforgettable performance in that film competing with the veteran Malayalam actor {late}Murali. His Tirunelveli Tamil was specially appealing in that film.His other notable film entries are Mani Rathnam's  Kannathil Muthamittaal,Shankar's Endhiran and Hari's Singam I and II.Unlike Delhi Ganesh,Delhi Kumar is more a sober actor, capable of forcefully stamping the sensitive side of fatherhood.It is not that he is incapable of delivering humor.On the other hand, comedy could be called the distinct fortress of Delhi Ganesh. In performing father roles, both these actors with their Delhi prefixes, have cast their indelible impressions.
The other actor whose origins could be linked to Vellore in Tamil Nadu,is totally of a different mettle.Though he too takes his metropolitan prefix because of his chronic association with the Calcutta troupe of stage actors,he has the distinction of bearing a high profile academic background. Yes.Calcutta N.Viswanathan who is no more today, had the singular pride of teaching English at St.Xaviers' College, Calcutta for nearly forty years,besides performing stage plays and acting in films. His other unique position is the fact that he had acted in the films of Mrinal Sen and Satyajit Ray and his Bengali films were more in number than his Tamil list.It is K. Balachander who once again has to be credited for inducting this special actor in Tamil Cinema.
As the father of an unimaginably aggressive son {played by Rajinikanth} in Moonru Mudichu, another memorable Balachander film,he delivered a commendable  role play, in taming his virtually bad son, with the help of his young second wife {Sridevi},whom his son wanted to marry by cleverly killing her lover. Viswanathan's first Tamil film was his best too.Next in a villain  role bearing a holy name 'Parisutham"{The Immaculate}he displayed sweet coated villainy, reminding everyone of the verity behind Shakespeare's maxim, 'one may smile and smile and be a villain'.It was a character full of venom dipped in tons of sweetness. Viswanathan as an actor, can ever be remembered for the perfect underplay of emotions and an incomparable poise in performance.His other notable Tamil films are Moodu Pani,Enakkul Oruvan,Mogam Muppadhu Varusham,Kan Sivandhal Man Sivakkum,Nilavu Suduvadhillai and Baba.
These three actors with their metropolitan prefixes, certainly reflect the structural majesty and grandeur in their acting mold.Though Delhi Ganesh and Kumar have brought out the rural impact on their acting styles, it could be rightly said that all the three actors are more compact in refined character portrayal, with absolute grasp of the aristocratic side, which was perfectly personified by an actor of long standing repute like S.V.Renga Rao, whose splendid style of acting had a monumental influence on many actors, performing character roles.These three men have certainly brought out a kind of aristocratic caliber in their acting career.
======================0=======================
Posted by chandran at 4:11 PM No comments: