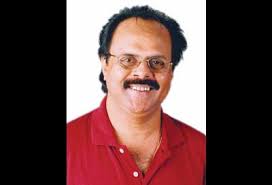 Humour is the fuel for the laughter engine.In other words,if laughter is the exterior,humour is its interior.To counter a well known maxim we could say humour and not brevity that is the soul of wit.Comedians are celebrated with gusto and applause for their delightful delivery of humour for which it is the soul of the skit that matters.Tamil cinema owes a significant portion of its comedy perfection to the vigour sustaining dialogues and script contributed by the veteran humour wizard Crazy Mohan.
Born as Mohan Rengachari,this Mechanical Engineer of the early Nineteen Seventies turned into stage play promotion and comedy skit promotion for quite a number of Tamil films.The success that he tasted by his stage play enacted in Guindy Engineering College perhaps changed his fate line from an Engineering career to that of a playwright and dialogue writer. Launching his "Crazy Creations" and making his brother Maadhu Balaji {prefix Maadhu lifted from Nagesh's role in Edhir Neechal} as the hero of most of his dramas,Mohan has substantially enriched Tamil stage plays and films by his massive contribution of plays,scripts and dialogues.
Unlike late Cho Ramasamy whose sharp dialogues were aimed at political foibles and failures, Crazy Mohan's laughter vehicle drove on tracks of well timed spot humour generating instant laughter.Mohan believed in the power of words to generate laughter without letting the impact of words go waste and with the forceful pull of drawing the attention of the audience to the humour-pregnant contexts and the words that guaranteed those contexts.Consequently none of the audience would fail to burst into a stream of laughter.
Tamil Cinema has breathed humour through Crazy Mohan's lungs,in a number of films. Mohan started his film journey as story writer for veteran director K.Balachander's Poikal Kudhirai {which was based on Mohan's drama 'Marriage Made in Saloon'}.However it was his close association with Kamalahasan that made him an astounding harbinger of comedy sense and spot humour. Teaming up with Kamal for the epic level film Aboorva Sagodharargal, Mohan ran on the race course of comedy,taking the audience to the zenith of humour,solely by his intoxicating power of humour in films like Sathi Leelavadhi,Tenaly,Michael Madhana Kamarajan,Avvai Shanmugi, Kaadhalaa Kaadhalaa,Pammal K.Sambandam,Makalir Mattum, Panja Thandhiram and Vasool Raja MBBS. Almost all these films became mega hits purely on account of the rib tickling dialogues of Mohan who had an extraordinary flair for punning upon words blending English with Tamil and vice versa.The only film that Mohan worked with Rajinikanth was Arunachalam.
The other notable films for which Mohan wrote the script or subscribed his comedy skit were Chinna Maapillai,Vietnaam Colony and Chinna Vaadhiyaar{all Prabu's films}Vijay's Enrenrum Kaadhal,Soorya's Poovellaam Kettupaar and K.T.Kunjimon's Ratchagan.Besides his invisible offering of humour,Crazy Mohan has also made a brief appearance in quite a few films.Of these,the most notable show was in Vasool Raja MBBS as Dr. Markabandhu,the most intelligent and father doting  son of Kaka Radhakrishnan.
How he succumbed to the intimidating tactics of Kamalahasan,Prabu and others and how innocently he reflected his gullibility,nervousness and devotion to his father,constituted one of the most memorable scenes of comedy in Tamil cinema,showcasing the whole event through a carom  board game,played by the fun loving gang along with the carom enthusiast Kaka Radha krshnan.The other briefly noticeable roles that Mohan played were those of a car customer {Aboorva Sagothararkal} a grocer{Michael Madhana Kamarajan}a doctor{Chinna Vaadhiyaar} an astrologer{Enrenrum Kaadhal}an ENT Specialist {Pammal K.Sambandham} and a hearing impaired Judge {Kola Kolaya Mundhirikaa}.All these small time characters will stay remembered, in spite of their short focus.The last film in which he appeared was Kalyana Samayal Saadham and his last film bearing his dialogues was Naan Ee.
Many have ruled Tamil cinema and theatre in their own unique ways.Crazy Mohan has crazily ruled them both,as well as the Tamil small screen{through his serials of which Metti Oli was very popular}by his intelligent wordplay capable of creating a comedy wonderland with all its genuine ingredients.The essence of his comedy skit has always been at the exclusion of vulgarity and even in writing double meaning dialogues,intelligence has surpassed temptations for inferior abuse of words. Even while creating awkward situations as humour incentives, Mohan has always taken care to close his comedy doors against meanness in gesticulation and articulation.
Crazy Mohan would definitely join the line of well meaning decent comedians empowered to amuse the crowd,through thought, word and deed,all governed by rules of genuine and spontaneous humour. His credibility for humour has always been looking up for laughter as a blessing and never been looking down for humour as a curse.Perhaps it was his absolute adherence to decent comedy that fetched him the Kalaimaamani award from the government of Tamil Nadu.It is really unfortunate that two great film celebrities passed away today. Mohan's death has followed that of Girish Karnad another great playwright and actor,who also died of heart attack this morning. Mohan's loss will surely throw a pall of gloom but in the long run,the memorable scenes of his comedy shows will lend him a stamp  of immortality and wipe away the gloom as light liquidates darkness.
==========================
Posted by chandran at 4:54 PM 3 comments:

A passionate writer,a probing playwright,a dedicated theatrical celebrity and a poignant actor that Girish Raghunath Karnad was,it is very painful to accept his death,though death comes to all with or without giving notice.I still cherish my happy moments,teaching one of his wonderful creations 'Hayavadana' to a couple of batches of Arts and Science students in the college where I worked and retired from.I would rate him as an actor of awesome academic mould with a very high and critically challenging creative potential.I have watched almost all the Tamil films he acted and I am sure they would all celebrate his memory in the decades to come.
What was special about this cutely urbanized actor,was his aristocratic demeanour that would naturally fix him in any elite role such as the Black dog Security Service Officer {Kadhal Mannan} and a haughty,scheming,status conscious,greedy,tax evading industrialist cum business magnate {Naan Adimai Illai,Kadhalan,Minsaara Kanavu,Ratchagan,and Chellame}. Mysskin's Mugamoodi was the last Tamil film that Karnad acted,as the grandfather of the hero. {played by Jeeva}He also worked with Kamalahasan in Hey Ram.
The way Karnad would churn out the intricacies of his character delineation was a special treat to watch.His eyes would deliberate his manipulations more than his tongue.The arrogance of wealth was the most notable trait that he would felicitously portray through his body language and his distinct style of acting.On the Tamil screen,he was ever a self conscious promoter of foul accumulation and proud display of wealth,through characters evolved with an extraordinary care for the Machiavellian touch.It would perhaps look that in his death,the world of cinema stands impoverished,because it has lost one of its fabulous faces of the guilt and grandeur of wealth.
So suave and refined were his looks that only actors like {late}S.V.Renga Rao and Pran of the last millennium could be equated with him in exhibiting the value and vile of the highest rung of the aristocratic ladder.Late Raghuvaran was a perfect match to his negative role play and perhaps that was why they both were brought together,in sharing the venom of villainy in films like Kaadalan and Ratchagan.The winning streak of these two actors,was based on their innate grasp of playing crude villainy with a mask of refinement,that would enable them to ruin their rivals through their soft dozes of devilishness.
Karnad's main focus was on Kannada cinema followed by his contribution to Hindi and Tamil films.He has also acted in a couple of Malayalam films{Neela Kurinji Poothapol and The Prince}.Beyond his enrichment of Indian cinema was his exhaustive contribution to Kannada literature and no doubt it was his creative versatility that earned him the most coveted  Jnanpith Award from the government of India,for his significant literary achievements.Today Tamil cinema is as much deprived of one of its most dynamic actors as the Kannada region has every reason to mourn the death of one of its most illustrious sons.The Tamil soil is certainly indebted to this great Indian,for adding pep and flavour to its celluloid glory.

The most remembered Court scenes in Tamil films.{Revised} 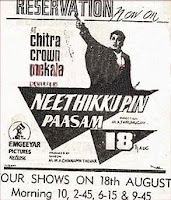 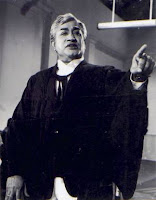 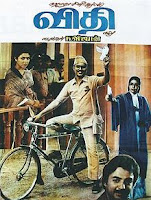 Posted by chandran at 3:11 PM No comments: