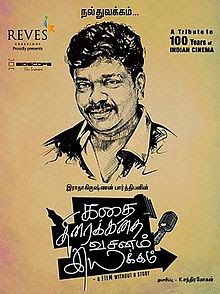 Radhakrishnan Parthiban’s ‘’Kadhai Thiraikadhai Vasanam Iyakkam’’ {Story, screenplay, Dialogue and Direction’’} carrying the apologetic note ‘a  film without a story’ rightly justifies the note. Perhaps the lengthy title of the movie has inspired the director in Parthiban to expand his name too, from the hitherto R.Parthiban to Radhakrishnan Parthiban. The four worded title, in my opinion, could do Parthiban {one of my highly esteemed Tamil film personalities known for creative originality,in the line of K.Balachander Barathiraja and Kamalahasan }genuinely  proud of the third component of the title.
Parthiban,most reputed for his spontaneous potshots hardly misses them at any point of the scenic sequences and it is the banter and cheeky sense of humour that infuse consistent tempo and gusto to an otherwise moderate film and make it fit for audience appreciation. Every scene showing Arvind{Dhinesh Natarajan} snubbing Seenu Sir {Thambi Ramaiah} is a mixture of juvenile presumptuousness  and senile helplessness. But  the amount of hilarity and laughter these scenes generate, are a great stuff, minimizing the  impact of the loopholes in narration.
Parthiban’s banter is not anything new to us. We have been interestingly watching it from his very first film Pudhiya Paadhai. Besides his word teasers, we have also seen a kind of mood shuffling, deftly introduced by him in narrating his scenes and characters. This mood shuffling of Parthian is always a beautiful blend of humour,despair, anger, taunt and cynicism, hardly sparing any section of society including women. His wrath against irresponsible parents for the creation of bastards, criminals and thugs used to surface in some of his most successful films. He has not spared the political system and police force too.
There is a kind of creative audacity in him that places him far ahead of others, involved in making films. One could also see a pattern of mood imbalance prioritized in the form of themes and characters in many of his films and even in this latest venture, there is a character-a security guard-talking to the ghost of his boss. Satire is Parthiban’s pet area and in this film he has run the risk of temerity, in throwing stones from a glass house, not minding the damage it might cause to his own creative abode.
The caricature of Lord Bramma, briefly played by Praksh Raj is nothing but a hurried hotchpotch. In fact all the beginning shots, except the one showing Vijay Sethupathi stealing the ceiling fan instead of  doing the anticipated act of committing suicide by hanging from the fan,do not seem to evoke the intended result of creating an inventive approach. Similarly,the story within the story, showing Arya and Amala Paul as lovers, turns out to be a listless narration without adding any tempo to the main course.
In one scene a woman is shown asking the film making team if they do any preview of their films. When the team responds in the affirmative, pat she asks them, then why the films are so intolerably bad. This is Parthiban’s style of self-criticism that has the potential to endanger his own script and its final outcome. But he does not bother  about that.
Two characters who monitor the pulse of the film from the audience track, are Arvind and Seenu Sir.I am sure this is yet another memorable performance of Thambi Ramaiah after Myna and Kumki. The sly reference to Devar Films leaves its intentions to audience perception. But the new generation film makers should not forget the fact that Devar Films had its distinct merit of grasping what would sell and what would not.The pointed reference to Bagyaraj excellently handling the climax in his most celebrated filmAndha Ezhu Naatkal, speaks about the quality of career association between Parthiban and Bagyaraj.
Santhosh Pradap playing the hero is compact in form and performance, maintaining the level of sobriety that his role requires. Akila Kishore as the heroine Daksha, has been adequately utilized in reflecting the aesthetics and dynamism of womanhood. Dialogues such as ‘you deserve a kiss’ and koyya pazham becoming koidha pazham would reach the younger audience in their romantic ripeness.
The film unit repeatedly says that the audience are the ultimate jury to accept or reject a film. Four of us went to watch the film. I loved the film for its cutting dialogues and screen play but regretted the absence of anything new in theme and direction. One of my companions could not watch it because her kid cried at the irrelevant horrid start of the film.The three year old kid, used to watching films with a projector at home, rejected the movie and asked us to change the film.As we could not do it at a theatre, the mother and kid instantly left the theatre. Of the other two,one could withstand it, while the last in the list squarely hated the film, calling it a waste of time.Interestingly, all my companions for this movie watch, constituted the women audience. What the other sections of the audience would say, we have to wait and see.
Posted by chandran at 11:45 AM No comments:

Posted by chandran at 6:39 PM No comments: