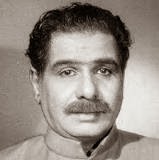 Tamil Cinema has benefited a lot by the extensive contribution of actors,directors, producers and music composers from its most fraternal Telugu Film industry.Among heroes, there were N.T.Ramarao,A.Nageswararao and Suman who have adorned significant roles in Tamil films.But among character actors,after S.V.Rengarao,it is V.Nagaiah,the veteran actor who comes to our memory, as an actor performing modest and respectable roles, with flawless perception and portrayal.
V.Nagaiah is significantly an old timer whose cinematic appearances were clearly meant for a clean and perfect reflection of life's most cherished value supporting systems, such as self dignity in poverty,absence of arrogance in wealth,love for fellow human beings and conviction in one's perception of what is right and what is wrong.In addition to these, there always predominantly came up as one of his top priorities,his unflinching faith in god and the spiritual fundamentals, attached to god realization.All these attributes made him a venerable actor, upholding the grandeur of both Telugu and Tamil Cinema.
The uniqueness of V.Nagaiah was his shaking but firm voice modulation.His voice had the singular capacity to squeeze out sorrow and the pang of suffering.Perhaps that was the reason why he was chosen to play a vital role in Ezhai Padum Paadu,a film based on Victor Hugo's novel ''Les Miserables''.He was a perfect fit for playing the righteous person in any context,be it as a spiritual head or as the organizer of an orphanage as he did in films like Dheiva Magan, Saraswathi Sabatham, AVM's Ramu and so on.My memories of this dignified actor, takes me to my childhood days of watching films like, Pennin Perumai,Tenali Raman and Sarvadhikari.
Like most other character actors of the last century,Nagaiah had also acted more number of films with Sivaji Ganesan.Even among the films mentioned above,excepting Sarvadhikari,the other films were those, starring either Sivaji Ganesan or Gemini Ganesan or both.Two of his other MGR films I remember are,Parakkum Paavai and Nam Nadu.Whereas, he has a list of Sivaji Ganesan films like VanangamudiEdhir Paaraadhadhu,Ellaam Unakkaaga,Ambikapadhi,Alayamani,Valar Pirai,Paava Mannippu,Pachai Vilakku, Shanthi,Iru Malargal,Saraswathi Sabadham,Thillaanaa Mohanaamabaal Naan Vanangum Dheivam,Kai Kodutha Dheivam,Dheivamagan and Iru Dhuruvam.With Gemini Ganesan,besides Ramu,he has acted in films like Kanavane Kankanda Dheivam and Karpagam. Nagaiah has also acted in mythological films like Sampoorana Ramayanam,Lava Kusa,Bhaktha Markandeya and Datchayakgnam.
Like S.V.Rengarao.Nagaiah was the special favourite of director K.S.Gopalakrishnan.While S.V.Rengarao always sported an aristocratic look,Nagaiah would be a perfect bet for donning the role of a wealthy man{ Pennin Perumai and Karpagam]or a pauper, looking for justice{in many films including MGR's Nam Naadu}. He would serve with modesty and rule without arrogance.He would have rarely performed a hateful character.His eyes would always transmit a sense of piety and poise.His voice vigorously combined elements of firmness,empathy,grief and serenity. Over- acting was never a part of his dictionary of character display.For him, Cinema was like a spiritual process.He was one of those rarest actors, who adored the film field, with utmost dedication and commitment. He made himself a venerable actor, not only by his looks and manner of acting, but also by his continued reverence for Cinema, as if it was a temple of learning.In this particular respect, Nagaiah out beats all other actors of his generation and those who succeeded him.
======================0=========================
Posted by chandran at 7:23 PM 5 comments:

The Conjugal Core of Tamil Cinema.

Posted by chandran at 6:47 PM No comments:

A Thriller on a Different Track.

A thriller is generally a film of suspense, mystery and action segments, narrated in an eerie and stunning mode, duly supported by its relevant music component. In this regard, the Malayalam film 'Drishyam' released by the end of 2013 could not be called a thriller. But the sudden turn of events on screen, incorporating an action segment, slowly building up a mood of gripping tension, that binds the audience straight to their seats, makes the film being classified as a thriller on a different track.
An unruffled start, shows a docile Mohanlal found time and again, watching movies on the television at his cable TV office located in a village. Then come a few neatly pictured scenes of family routine, highlighting Mohanlal’s character as a hard working orphan, being blessed with a loving wife and two daughters and this gives an impression as if we are watching yet another family drama, taking us on an unusually slow pace. This appears to be a deliberate approach to give least room for any guess of  thrilling developments- in- waiting for Mohanlal and his family.The only hunch for some untoward happening in the offing, is felt by the periodical, conflicting interactions that take place at the local teashop, between Mohanlal and a selfishly exploiting cop{aggressively portrayed by the usually comedy prone actor Kalabhavan Shajon}.
The sailing is smooth for Mohanlal and his family, until an unexpected incident crosses the way of Mohanlal’s elder daughter when she is allowed to participate in a nature camp arranged by her school. A video of the girl taking bath, secretly taken by a crooked camp mate, by using his mobile phone, triggers the subsequent tension moments of the film. The notorious teen ager who is the son of a woman police officer, blackmails Mohanlal’s daughter with the video clipping, trying to exploit the situation. This leads to the helpless and unpremeditated killing of the boy by the girl and what happens after this, makes the film a kind of thriller, hitherto not watched on the big screen.
What makes the film distinct is the way a calm Mohanlal handles the situation, his regular movie watch visuals, promptly helping him come out with a perfect recipe,to save his family, from getting entangled in the case of murder of the boy.With flawless manipulation of events and records and with a psychologically tricky extraction of favourable endorsements from all witnesses, he surmounts hurdle after hurdle, of the police investigation process, which has been pictured without any cinematic input.It is a sort of realistic investigation experience we undergo. The resilient cooperation of the family members in executing Mohanlal’s intelligent retrieval programme, is another milestone and each one including the little younger daughter, crosses it with excellent equanimity and poise, as if nothing abnormal had happened in the family.But still something goes awry with the whole exercise, when the younger daughter who under intolerable conditions, budges to police torture, leading to an unexpected climax.
Nothing is unnatural here. Nobody overdoes the job. There is no unwanted intrusion of sound and fury. Asha Sarath as the Police Officer adequately expresses her emotion as a loving mother and Siddique as the boy’s father delivers a dignified role. Meena as the wife of Mohanlal is subdued and well tuned to the character of an emotionally strained mother. The most positive aspect of the movie is its intelligently carved mode of narration, with extraordinary compactness in each frame.There is no deviation from the core of a familiar story line, being treated with freshness in presentation.
Mohanlal the conventionally blown up hero in varied styles in different films, is confined to a real life character mould. Here he silently excels in essaying the role of an ordinary husband and father, rowing happily his small family boat, but,getting stuck all of a sudden, by the blow of a tsunami type of horrid occurrence, that keeps him frozen with life chilling consequences.He conquers the demands of the role with his customary acting exuberance. Drishyam on the whole, resembles a ripple free lake, but at the same time it causes, extraordinary ripples in the minds of the viewers.The film should be duly credited for its commendable editing, by seamlessly blending the change over of scenic sequences with unique aesthetic layers, throughout its narration. To conclude, the movie seems to open up a new track for the travel of the thriller vehicle. Director Jeethu Joseph deserves a worthy recognition for this track change, in a thriller show.
==================0==================

Posted by chandran at 7:03 PM No comments: