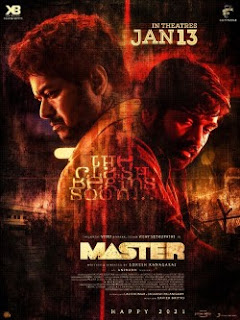 Usually I am one of the senior citizens who would watch a Vijay film at the theatre either on the day of  its release or at least during its first week's run.This time owing to the Covid19 situation it could not happen.The Amazon Prime Video show made it possible at last.Watching a film at home naturally does not carry the fullfledged theatre effect.But it makes one watch the course of cinematic events without any hitch.After watching the film a kind of void prevailed.It looked as though I did not have a mind filling Vijay film of its usual stuff,I mean the energy packed full meal of this most popular actor.

Is it because the film is a fifty fifty package of Lokesh Kanagaraj and Vijay?Is it due to the fact the a theme line of this story was already effectively handled in Thimiru Pidichavan,a recent Vijay Antony movie?Is it because of the dipsomaniac effect spreading through the character of the hero,during the first half of the film?Or is it due to the more challenging,antagonistic role of Vijay Sethupadhi,fascinatingly displayed in Vikram Vedha,that is profoundly missing in Master? May be it is very difficulat to imagine Vijay Sethupathi as a menacing and gory villain.Or perhaps, is it due to the whole narration being sobre without the presence of comic relief  provided by a Sathish or Yogi Babu?

Malavika Mohanan ,Andrea Jeremiah,Santhanu Bhagyaraj, Azhagamperumal, Rajesh, Nasser,Sai Dheena and Mahanadhi Shankar all get dissolved in the dual show of Vijay and Vijay Sethupathi.The reason for the hero turning into an alcoholic is quickly passed on to Malavika Mohanan by Nasser, even before we listen to the dialogue and grasp the information.

Two scenes stay deeply memorable.1}Vijay silently crying over the hanging of the two young boys and his failure to prevent their pathetic death.2}Vijay's furious outburst when he comes to know that his four students /associates have been brutally killed.The climax deserved better finishing touches from Lokesh Kanagaraj.Anirudh is the major musical strength with his wonderful background score. Arjun Das as Das is crudely striking in his role play.

The moot question is why some of our heroes do not completely submit themselves to a demonstrative director like Lokesh Kanagaraj or A.R Murugadoss as many did before a veteran director like K.Balachander?A.R.Murugadoss once succeeded with Vijay in Thuppaaki but he could not repeat the same in Sircar.However Vijay's bonhomie with Atlee seems to have worked out very dynamically in all their three movies,exhibiting a double strength throw .

Above all,Vijay as hero is now clearly joining hands with the urchins and youths of the socially downward,down trodden lot,with a clear goal in mind.His recent movies are proofs of that pudding in its making.In that sense Master is a well cooked meal though not a meaty one.