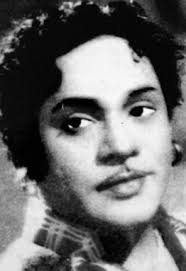 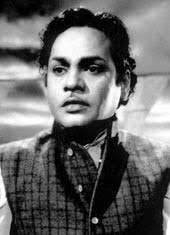 Kumbakonam Ramabadra Ramasamy was one of the most prominent faces of the founding years of Tamil Cinema.He had a genuine passion for depicting different types of roles both on stage and in the big screen with incomparable dedication and dynamism.He had a face fit for the grease and a talent right for the role.

The best thing in K.R.Ramasamy was his enormous energy level with which he performed miracle and magic to the extent of transforming his sharp and jarring voice mould to a singer's note and style and deliver nearly sixty unique songs adding commendable glory not only to his films but also to himself.In one film {Sorgavasal} alone,he had sung more than a dozen songs.It was his nasal accent gracefully blended to his rough voice,that gave his numbers a special stamp of musical richness.He was naturally triumphant, in the line of his contemporary hero P.U.Chinnappa.

K.R.R as he was briefly addressed,had an innate adaptability and grace to perform characters,through which he could be remembered as a tall actor,irrespective of the time slot allotted to him for appearance either on stage or in Cinema.His interest and involvement in the Dravidian Movement,brought him closer to the most loved leader of Dravidian politics,called Arignar Anna.With Anna's screen play and his distinct power of acting K.R.R performed different roles in films like Velaikaari,Sorgavasal and Or Iravu and raised the status of nascent Tamil Cinema.

K.R.R had worked with many big banner film production houses like Jupiter Pictures,AVM Studios,Modern Theatres and Vijaya International.He had also been working with most talented actresses like V.N.Janaki,M.V.Rajamma,B.S.Saroja,  Lalitha,Padmini,Savithri and Anjali Devi.During his more than three decades of film career, KRR had vibrantly played the hero,anti hero,character roles and those with negative shades.In his last film Nam Naadu,we saw him as a poor school teacher victimised by the corrupt political system.

Whatever role KRR played,he became heart and soul of the character and became part and parcel of Tamil Cinema.It was his tremendous voice ipmact that keeps vibrating in our ears as well as through the years of audience memory.He was one of those rarest multi talented faces of the Tamil film industry and it is really a matter of pride and pleasure to remember him now,after five decades of his passing away, following the most dreaded disease cancer, that ate away his precious life "like canker to the rose".