Rocketry, a film true to life. 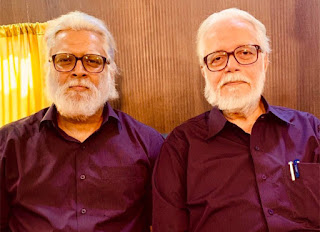 To do a biopic,is the most challenging part of film making.That too,to make a film on a living person is an extremely exacting task. R.Madhavan can take the special credit for making a film on the highly distinguished ISRO scientist Nambi Narayanan,who was lowly treated by the powers that be,due to hidden political reasons and alleged international conspiracy links.R.Madhavan who has produced and directed the film 'Rocketry-the Nambi effect' has also donned the role of the protagonist.

R.Madhavan seems to have scrupulously breathed into the soul of a living person and the final scene in which Mr.Nambi Narayanan himself appears, creates an assertive impact of the meticulous make up of Madhavan's profile,to perfectly match that of the real hero of the ISRO.

Watching the movie with an absorbing mindset, one would not miss the fact that,the scene by scene narration of happenings,makes the film an absolute version of real life events.Starting from Nambi's Princeton University days,to those involving the aggressive mindset of the scientist{with his distinct flair for liquid fuel and cryogenics},to realize his pointed objectives in the interest of the country,his experiences in France and Russia and finally the gruesome blows ending up with Nambi's dirty incarceration,every frame bypasses the cinematic zone and creates a relook into the true incidents in a  person's life.

A news column in the Hindu{1st August 2022}with the picture of Mr.Nambi Narayanan and Mr.D.R.Karthikeyan, former CBI director,carried information about the two decades + years of mudslinging of the former and the amount of insult heaped upon him.This news bullettin contained the caption "Scientists deserve immunity from arbitrary police action".Mr.Nambi's words in the Hindu were as follows:-"I wanted the truth to be told in clear terms in a language understood by all.Today I feel it has tremendous impact on the minds of people"These words can certainly lead  us to our inference that R.Madhavan's film has impressed the original protagonist.

R.Madhavan who was born on the Tamil big screen as a chocolate boy in Mani Ratnam's Alai Paayudhe has traveled miles in his film journey,with the same image in films like Run,Minnale&Dum Dum Dum.as a cowardly cop in Vettai,as a formidable cop in Vikram Vedha,as an aggressive sports buff in Irudhi Suttru and as a homely hero in many films.From romance to a variety of roles,Madhavan has hardly failed to cast indelible impressions in the minds of the audience.

. With 'Rocketry:-the Nambi effect' it can be rightly said,that he has taken a new avatar,by evolving himself as a perfect film maker,with a wild cry for establishing veracity and valued dedication to details,to make a film that would firmly set into the ground realities of a person's life,so as to make  doubtless truths speak loudly, through the silver screen.By making a film of this amazing kind,Madhavan has not only raised the status of Tamil cinema,but has also established the fact,that if a film maker's intentions are profoundly closer to his goal,it will be easier to make a mark in doing a biopic.The chocolate boy of yesteryears, deserves for sure,unfailing accolades,both from the audience and from the ISRO.(Thanks to Amazon Prime Videos )