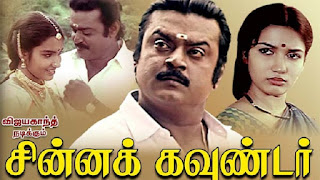 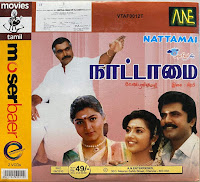 This blog already carries an article bearing the title"The Most remembered court scenes in Tamil films".The above article threw light on some significant court scenes forming the core of narration of the films in which they were vitally integrated to the main story line.But the present article is not about any such established legal courts functioning in villages.It is about the practice of justice system followed in villages,under some people who happen to be the highly esteemed and trusted village chieftains.

For the village folk a noble and righteous man adored by most people,becomes the incarnation of justice and his verdicts are taken as invincible pronouncements of justice to be adhered to,by one and all.Quite a few Tamil films have focused on this kind of judicial practice followed in villages.But Two Tamil films remain outstanding in this regard.They are Chinna Gounder{1992}and Naattamai{1994}

'Chinna Gounder'released by Anandhi Films was made by R.V.Udhayakumar,who had already been a popular film maker,through his noted films like Urudhi Mozhi,Urimai Geedham,Pudhiya Vaanam and Kizhakku Vaasal.The last film cited,got him the Tamil Nadu State award for best fim [third place}and this pride of award continued for Chinna Gounder also.Chinna Gounder showcasing captain Vijayakanth in the titular role,became a unique film for the hero,because it was the first film that portrayed him in a soft,dignified and greatly esteemed role with remarkable voice control in dialogue delivery and commendable relevance to the community referred to,in costume and in the make up manuel of all characters.

Besides Vijayakanth,Suganya,Salim Ghouse Manorama and Sathyapriya played key roles in the film.The story of the film was written by R.Selvaraj and cinematography was by A.Karthick Raja. Music was composed by the veteran Ilayaraja and songs like"Andha Vaanatha Pola"& 'Muthumani Maala"were resounding numbers ever ringing in audience memory.Some of the playful verbal exchanges between Manorama and Suganya,presented a specially attractive portion of the events of the film.

Naattaamai  released two years later was a blockbuster film for K.S.Ravikumar,one of the most ssuccessful faces of Tamil cinema.The movie starrring Sarath Kumar {in dual roles}, Vijayakumar,Kushbu and Meena was released by Super Good films and had its story/dialogues written by Erode Sounder.Cinematography was done by Ashok Rajan and music was by Sirpi.The song "Kottapaakkum Kozhundhu Vethalaiyum"became a spot success for Sirpi and reached all homes as a heart warming treat.

Chinna Gounder starts with an elderly advocate{film maker Ra Sankaran} passing through a village.He is surprised to notice the way the village chieftain {Vijayakanth} deals with a ticklish case and delivers his verdict,as the voice of justice,without wasting much time.Nattaamai also begins with a case of conflict heard by the village head Sarathkumar between two brothers trying to separate their aged parents according to their convenience.The hero delivers his verdict,based on family values cherished from time immemorial.

The two films share a few features in common.Both the films centre round a particular community,the former more obviously with its title and the latter with the habits,customs and type of Tamil dialect exhibited.Both the films depict the rivalry and enmity prevailing between the families of two brothers-in-law.

If Salim Ghouse is the villainous brother-in-law of Vijayakanth,in Chinna Gounder, Erode Soundar {Who has writted the story&dialogues} appears as the friendly brother in law of the elder Naattaamai {Vijayakumar). However,he turns rude and shoots down Vjayakumar dead, because the latter declares that the former's son should marry the girl from a lower caste raped by him.Before dying,Naattaamai categorically tells the villagers not to have any truck with Erode Sounder &family for the next eighteen years.

Whereas,in Chinna Gounder the heinous brother in law kills the hero's sister in order to marry his concubine.Later,when his efforts to seize the local temple through false documents are exposed by the hero,their enmity gets intensified.Thus in both the films family feud becomes the focal point of narration.In both the films Goundamani Senthil team's comedy became a talking point.Moreover Manorama plays a very important role as the reasonable sister of the elder Nattaamai and as the righteous mother of Chinna Gounder

There are some different aspects between the two films too.Unlike Chinna Gounder, Naattaamai is a two generation story with Sarathkumar,the elder son of Vijayakumar wearing and wielding the mantle of Naattaamai.The events relating to the elder Naattaamai are only shown in a fabulous flash back.Whereas in Chinna Gounder,the whole justice episodes move towards the central character Vijayakanth. If in Chinna Gounder the hero himself is suspected in the pregnancy of his wife's sister,in Naattaamai the hero's younger brother in accused by some people against the alleged pregnancy and murder of a local school teacher who falls a prey to the game plan of the villain.

The climax of the two films marks a huge difference.What an imprinting scene it was to watch Salim Ghouse begging for forgiveness from the village folk and the villagers simply walking away without taking cognisance of his appeal.In a contrast,Naattaamai shows the fall of elder Sarathkumar {Shanmugam}unable to bear the guilt of passing a wrong verdict against his innocent younger brother{Pasupathi,the other Sarathkumar}, in the murder of the woman teacher who was actually killed by Ponnambalam{his cousin}.

While Naattaamai can be called a wholesome mass entertainer film,Chinna Gounder was admired for its gripping narration of events and significant evolution of characterization incomparably justifying the theme and story line of the film.Nattaamai's speacial attraction was the brief appearance of Vijayakumar in a commanding role with a commendable display of what and how a village chieftain should be.Vijayakanth silently walked through his role with the might of justice and height of roleplay.On the whole both Chinna Gounder and Naattaamai are movies representative of the rural values of life to be cherished and valued and the two films will occupy a sky high position in the archives of Tamil Cinema.