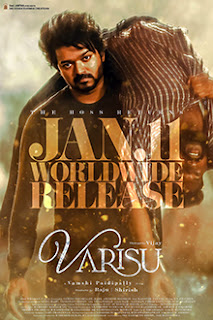 Telugu film maker Vamshi Paidipally is not new to Tamil Cinema.His film Thozha{Oopiri in Telugu} starring Nagarjuna and Karthik was viewed as one of the cleanest films in Tamil cinema.But when a Vijay film goes into his hands,it creates a sensation and in this aspect Tamil audience welcome him with fanfare. Vamshi is a film maker who looks for a clean and impressive skit to hit the big screen.A special pat for him for having enrolled Vijay in a full fledged family drama,because so far Vijay has been seen only as a romantic and action hero,with a few films reflecting sister sentiment,as witnessed in Thiruppachi.

Vaarisu has a well planned skit,though its narration mostly travels on predicted lines.Vijay has put his heart and soul into the film with his sense of humour,sharp delivery of dialogues and pep and style in action sequences.A couple of humorous interactions between Vijay and Yogi Babu were greatly enjoyable. But the same humour throw followed by Vijay in the Company business meeting and in the climax scene were perhaps meant for his targeted fans.

When it comes to the ensemble cast, Sarathkumar and Prakash Raj fit into their roles as perfect bets.Sarathkumar who has been so far witnessed as the rural family head, fairly feels the comfort zone of his role,as a business tycoon and as an urban family head.Jeyasutha steals the show with absolute sense of poise and dignity,as the mother of three sons.This film should give a new lead for Shaam.S.Thaman is the man of music doing two energising numbers like 'Vaa Thalaivaa' and 'Ranjithame'. Choregraphy is exuberant and Vijay in his late forties still holds the fire for agile and captivating limb movements,for the dance sequences.

Some of the dialogues were heard as memorably value based utterances.To mention a few Jeyasutha tells Vijay that one does not bother about tolerance or a mind to adjust, when one is attached to a thing or surrounding. In the cilmax scene,Vijay is seen telling Prakash Raj that how one lives is more important than success or defeat in one's life.The final shot is when Vijay tells his father"I might not have followed your footprints.But it was you who made me walk".Though I enjoyed all these dialogues,a couple of youths sitting behind me at the theatre,were found mocking at the dialogues.Changed perspective,or generation gap!

A portrait of Gemini Ganesan is found hanging on the walls of Sarathkumar's house.Vamshi could have explained some connection of the family with that photo.Anyhow let us welcome Vamshi to do more Tamil films of this kind, especially,with action heroes like Vijay and take them further closer to people of all age groups.A word of special appreciation should be passed on to editor Praveen,for the calm and final fusion of an event of death, as predicted by Prabu,who has neatly essayed his role as a doctor.To conclude,Vaarisu is a vital show of action,sentiment and values of life,with the inherent message that making a worthy life is as much important as making money or doing business.