The immortal voice of a Reformist Comedian. 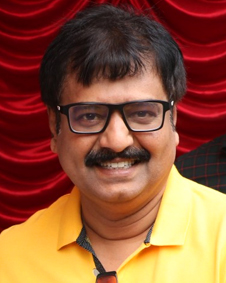 The voice of a comedian is valued by his verbal wield to catch the imagination of the audience through sense and nonsense,because humour is generated by both.Charlie Chaplin entertained the world audience,by his nonsense spot situations,that made him deliberately vulnerable to the self created awkward moment ,hailing from his masterly sense of humour.

But sense plays a more powerful role in creating instant and incessant laughter through witticisms and winning word power.If those witticisms and word power are bound to the destination of social reform,they make a comedian and his comic deliveries immortal. Forgetting the other comedians of Tamil Cinema for a while,if one thinks of Vivek,it was really a mighty stuff of humour that he passed on to the audience because his role play was a combination of sense and nonsense.

One could see a galaxy of comedians coming into a single fold in his performance and that was the essence of Vivek who is sadly no more today.Intoroduced by veteran film maker K.Balachander in Manadhil Urudhi Vendum,Vivek reflected the title meaning of his first film,throughout his life time.

There was an element of Kalaivanar N.S.Krishnan in his comedy,blended with social concern and an innate cry for social reform.This salinet feature was indelibly visible in his role play in several films like Tirunelveli, Kadhal Sadugudu and more prominently in Saamy.His casual verbal comedy throw was vitally felt in numerous films like Vaali, Minnale,Kushi,Run,Dhool,Middle Class Madhavan,Dum Dum Dum{in which his role had a little negative shade}Sandhitha Velai,Manadhai Thiruduvitai,Thenkasi Pattanam Parthiban Kanavu,Whistle, Looty, Singam,Singam 2, Anniyan, Perazhagan,Harischandra,Pennin Manadhai Thottu and Sivaji.

Vivek's films with Dhanush,like Uthama Puthiran and Velaiyillaa Pattadhari gave a robust feel of humour rising from a sober base.The main hero that Vivek missed to join,has been Kamal.When he got the chance to do a role in Indian 2,God has plucked his life all of a sudden.

Vivek was a recipient of many awards both for his performance and contribution to Tamil Cinema.One can now recall his best comedy scenes from quite a number of films.But what the Tamil soil will be missing is his voice of hope,the one that was firmly planting ideas like the trees he went on planting and the positive energy that he continued to transmit to one and all,despite the tragedy that struck him with the loss of his son.

One of the sparkling witty dialogues he uttered in Puthu Puth Arthangal was" if you die today,tomorrow people will sprinkle milk on your ashes and bones"As per Hindu custom the dialogue was an instance of truism too.

Those who make others happy have their Covid 19 like sorrowful moments deliberately hidden under a mask.Vivek who took the Covid vaccine on Thursday, advised all to get vaccinated.He would not have thought that he would not be there to carry on his social missions including that of letting everyone hear his voice for a concerted battle against the pandemic,armed with masks and vaccines.It is a big loss and a sudden loss.It will take years for Tamil Cinema and for those who adored him as one of the best comedians,to come out of this emotional lockdown.

2)As the time in the blog writer's system is related to the US time zone this article  shows the previous date.