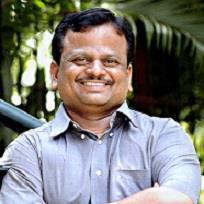 An action film solely depends upon its movement of events.One needs a special efficacy to trigger the movement of events and sustain the movement impressively throughout the course of film narrarion. The now departed K.V.Anand proved to be one of the best action movie makers by speedily moving the cinematic events with his extraordinary power of photograpghy and cinematography that finally landed him into the fancy land of film making with  action and events throbbing, throughout their presentation,on the silver screen.

K.V.Anand's association with cinematographers of felicity like P.C.Sriram,and film makers like Mani Rathnam and Shankar made him reach greater heights in Tamil Cinema on account of his infallible focus and photographic vision.Incidentally,it is also said that he was greatly interested in trekking in the Himalayas during the early years of his blossoming youth.It is no wonder that such a dedicated photographic visionary won the national award for Best Cinematography in his debut Malayalam film Thenmavin Kombath directed by Priyadharshan.Then came critical reviews for his Tamil film Kaadhal Dhesam.Before this,he had been the most valued assistant of P.C.Sriram for films like Gopura Vaasalile, Amaran, Meera,Devar Mahan and Thiruda Thiruda. He had also worked with Shankar for the most celebrated films Mudhalvan and Sivaji.

K.V.Anand's emergence as a fascinating film director in the film Kana Kandein,put him on the higher pedestal on account of his clean and beautiful delivery of story telling,character evolution and over all presentation of the course of events.The film starring Srikanth,Gopika and Prithvi Raj was really worthy of a truly entertaining stuff and K.V.Anand proved his level of energy in creativity without exaggerating his narration in any way.Especially,the role of Prithvi Raj as a wolfish usurer enabled him to find a firm footing in Tamil Cinema also,besides his astounding growth the Malayalam film industry.

Following this success story,Anand's keenness on kinetic energy took him to the zenith of victory through the Suriya starring mega hit film Ayyan.Within a short spell of time Anand was identified as a racy action movie maker,through his other most popular films like Ko, Maatraan,Anegan,Kavan and the most recent Kaappaan.He seems to have enjoyed a higher level of compatibility with the hero stuff of Suriya and the magnificent musical richness of Harris Jayaraj.

From a Photo Journalist to a reputed film maker,K.V.Anand's growth was really amazing.His quest for qualitative cinematograpghy would have certainly enhanced the visual grandeur of most of his films.None of his films was found to be sagging in energy or lacking in speed of narration. One could easily fall into the enchanting trap of the action supremacy and scenic ecstasy of almost all his films.From Kana Kandein to Kaappaan,it was a fast journey for this astute film maker and perhaps his focus on speed has taken him so speedily away from us,to the land of bliss.May his soul rest in peace.