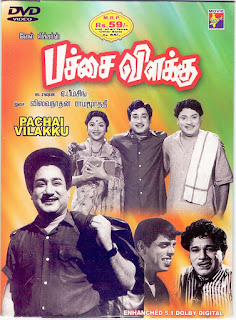 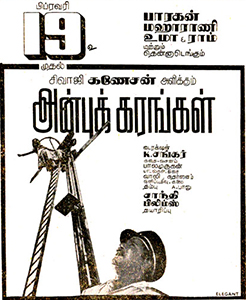 Film makers keep on extending their reach to a galaxy of terrains to reflect freshness and novelty in presentation. While there are a host of family dramas, crime and action thrillers,full length comedies,black comedies, mythological and historical navigation in celluloid form,army stories,cartoon pictures and science fiction films,there are a few exceptional films dealing with road transport,(films like Sundara Travels in Tamil)flight experiences (as we saw in the recent Hindi movie'Runway 34'with Ajay Devgn's ardent struggles to land the flight in the midst of roughest weather conditions).In this regard,three Tamil films which dealt with characters working with dedication for the Indian Southern Railways,draw my special attention.

The three Tamil films are Pachai Vilakku (1964) Anbu Karangal (1965) and Payanam (1976).Of these,the first two were Sivaji Ganesan films and the third film centered round the Chief character played by Major Sundarajan.Pachai Vilakku was produced by Vel pictures and was directed by A.Bhimsingh.Anbu Karangal was released by Sivaji Ganesan's home production unit Shanthi films and came under the screen play of  K.Shankar, another ace film maker of those days.

What makes the three films remarkable is the common underlying theme of devotion to work by the pivotal characters.In Pachai Vilakku,Sivaji Ganesan appeared as a locomotive driver working in the Southern Railways.The other two films had Sivaji Ganesan and Major Sundarajan working as station masters.All the three films carried an underlying tragic note.Pachai Vilakku and Anbu Karangal depicted the hero being burdened with the responsibility of taking care of his younger sister.Payanam portrayed the chief character being laid up with paternal pangs,shuttling between his routine bound to his Railway Station and his Railway quarters.The railway station named as Elamanur between Tiruchirappalli and Karur in Tamil Nadu, became the major scene of action,involving the cinematic events of the film.

The similarities among the three films were many.The dedicated driver of Pachai Vilakku saved a train and its passengers from a bridge blast planted by a villanous gang consisting of M.R.Radha and R.S Manohar.The hero did that mighty task at the cost of his life.The station master of Elamanur loved his job and the Railway Station much more than his family.In all the three films Nagesh played a key role.In Pachai Vilakku he was an Anglo Indian fireman assisting his driver Sivaji Ganesan and calling him'chief'with love and regard.

In Anbu Karangal Nagesh was a pointsman showing great respect to the station master Sivaji Ganesan.In Payanam he played the role of a prohit.Both Anbu Karangal and Payanam described the pangs of womanhood,revealed by Sivaji Ganesan's sister turning pregant before marriage and Sundarajan's daughter and grand son being left in the lurch,by a flirting and wayward youth{Srikanth}.

The climax of all the three films became the climax of grief.The death of the hero in Pachai Vilakku [with the hero's wife delivering an unfathered son after a long wait adding more anguish}struck a tragic blow not only to his family,but the entire audience.In Anbu Karangal the hero carried the dead body of his sister,whose bereaved daughter came under his care.The chief character in Payanam stood nonplussed at the bad news of the death of his son in the army and being unable to share the news with the girl,who loved his son and was waiting to marry him.

The dialogues and the way the characters delivered the dialogues in Payanam proved the creative assets of Vietnaam Veedu Sundaram.The other important fact to be recorded here,is the huge amount of comic relief that Payanam had,with a cluster of comedians like Thengai Srinivasan, Surulirajan,Neelu and Loose Mohan, besides Nagesh.Incidentally,there was another film called 'Payanam' made by Radha Mohan,showcasing a flight skyjacking episode,with a different story line.

Sowcar Janaki and Vijayakumari in Pachai Vilakku,Devika and Manimala in Anbu Karangal and Jeyachitra and Fadafat Jeyalakshmi in Payanam,wonderfully demonstrated their feminine wield of acting.Sivaji Ganesan as the locomotive driver and Major Sundarajan as Elamanur Railway Station Master will live long not only in audience memory but also as extra documentary characters in the records of the Indian Southern Railways.