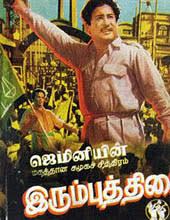 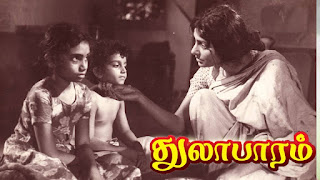 According to A.Philip Randolph,the famous American trade union leader,trade unionism is the essence of social uplift.It needs a great sense of humanism to pave the path for social progress with a quest for equality,liberty and fraternity.Wherever there is social exploitation there is need for a trade union.The fruits of labour are possible only through the power of collective bargaining.Oppression and curtailment of rights are the worst curse of humanity.

A safe and healthy working environment,fair pay and justifiable treatment of every worker,are the paramount principles,for which any trade union exists.Literature and cinema have thrown substantial light on this subject of labour unions.Tamil cinema not only has its several wings of trade unions but has also dealt with this subject in a few films,since its years of inception.

One of the earliest Tamil films that focused on the rights of the working class was Irumbuthirai{1960}produced and directed by S.S.Vasan under the Gemini Studios' banner.This memorable film depicted Sivaji Ganesan in the role of a trade union leader fighting for the legitimate rights of the workers of a spinning mill.S.V.Rengarao played the role of the mill owner with a shady past and with a lupine mindset to divide and suppress the rights and claims of the working class.A poignant black and white film,Irumbuthirai signalled the dawn of light for the betrayed sections of society raising their banner of revolt against the blood sucking poles of wealth,so as to attain their legitimate objectives of revolt.

It was the mass star MGR who dedicated his entire role plays for the progress of the working class and the down trodden.Once he became an acknowledged independent hero,he began to invest his heart and soul for donning only the good samaritan roles, that secured him the most popular place both in cinema and politics.Almost in all his films,there was a revolutionary song with a clear cut message to the exploting lobby to correct its foul means,lest it should be suitably dealt with.

Moreover,in a majority of his films MGR led a crusade against the oppression of the poor sections of society. He was a fisherman leader in Padahotti,a rebelling rickshaw puller in Rickshakaran,a labourer in Thozhilaali and the forceful voice of labour in films like Uzhaikkum Karangal,Oorukku Uzhaippavan,Thanippiravi,Vivasaayee  Chandrodhayam,Urimaikural and Meenava Nanban.One could not say that there was an organized trade union movement in all the films listed above.But MGR took up specific roles meant for raising all rightful issues concerning the working class.One of the prominent themes of an MGR film was the fair distribution of wealth between the rich and poor and he reflected this ideology even when he donned the role of a rich estate owner in films like Idhyakani.

But the classic Tamil film about trade unionism was Thulabaram a remake of the Malayalam film with the same title.It was a heart rending narration by the famous Malayalam film maker A.Vincent and the indisputably realistic portrayal of roles by A.V.M.Rajan and Sharadha.The film factually presented the intricacies of trade unionism with its inherent elements of brutality and betrayal,propagated by the agents of capitalism.Righteousness and the legitimate claims of labour rights,could hardly sustain against the force of money and muscle power,easily available for the industrial management lobby.Murder of a hard core trade unionist and its aftermath of taboo and poverty stories that engulf the routine of the trade unionist's wife and children of the trade unionist,were portrayed with stark blows of realism,in that most memorable award winning black and white film.

There was yet another beautiful film released in the mid Seventies starring Sivaji Ganesan and Gemini Ganesan as soul mates and prototypes of exemplary friendship. The film bearing a suggestive title 'Unakkaaga Naan'was the Tamil remake of Namak Haraam a Hindi block buster film,with Amitab and Rajesh Kanna playing as bosom  friends.Interestingly,one of the two friends is the son of a rich mill owner and the other is a poor guy.The latter who joins the mill with the objective of crushing the trade uniion movement in order to help his friend and his millionnaire father,slowly understands the agonising plight of the workers and decides to help the workers instead of his friend.Change of ideologies based on one's personal experience changes the goals and behaviour of individuals.This is what we saw in the role play of Gemini Ganesan in Unakkaga Naan.

Following this turn of events,the mill owner plans to kill his son's friend without the knowledge of his son.Later when the son {Sivaji Ganesan}comes to know the truth that his friend was killed by a murderous game hatched by his father,he owns the cause of his friend's murder and courts imprisonment much to the dismay and agony of the crooked mill owner,played by Major Sundarajan with vulpine vigour.The film was both a precious tale of friendship and a fine narration of the immovable thorns in the lives of the working class.

Gemini Ganesan did another role as the powerful voice of the downtrodden in the film Ezhai Pangalan.While Rajinikanth did an action drama bearing the title Thudikkum Karangal in which he focussed on the rights of the estate workers, Kamalahasan did a similar role in the film Naanum Oru Thozhilaali fighting for the welfare of the workers of a factory that originally belonged to his father but was usurped by a villain who also manipulated the accidental death of the hero's father.

Incidentally,both the films were directed by C.V.Sridhar and in both the films Jaishankar played the villain.P.Vasu's films like Mannan and Uzhaippali starring Rajinikanth and Coolie that cast Sarathkumar in lead role,depicted stories firming up the rights of tha labour unions.The other movie with the theme of trade unionism was Enna Mudhalaali Sowkyama,in which a woman{K.R.Vijaya} spearheaded a steadfast battle against the greedy and manipulative powers of wealth.

Though there are many more movies with trade union tints in their story line,Tamil cinema's ever historic films celebrating trade unionism were Irumbuthirai, Thulabaram and Unakkaaga Naan.Of the three,Thulabaram will be ever cherished in audience memory for its ground to earth base of theme,narration charactersation and agonising portrayal of the tragic events concerning the truest voice of trade unionism. Right to work and the right to the benefits of one's work are the kernal principles of Trade Unionism.Long live the Trade Union movement.Inquilab Zindabad!