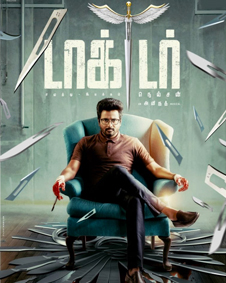 "Kidnap with a sense of comedy' is not new to Tamil Cinema.But the success of 'Doctor' is its timing of jokes,when guys are in trouble.Jokes that are truly on the spot and do not appear to be pre scripted. If you miss a second,you miss a vital rib tickling joke.These are new generation dark comedy times.'Naduvula Konajm Pakkatha Kanom','Pizza' and a few other films created a new wave in the concept of humour.Sundar. C''Kalakalappu'starring Shiva & Vimal and Kalakalappu 2 with Shiva,Jeeva and Jai along with a gang of self ridiculing villains, created a ruckus from the beginning till the end.

But the difference in 'Doctor' is that,a sober army medico treats everyone with his self styled grave doses of humour through his syringe of silence.Talk less and let everyone become a victim of the treatment,is the Siva Karthikeyan style.The hero has travelled a long way from his cheeky humour days of 'Manam Kothi Paravai',to be cherished by his fans,as a hero on the upper rungs of the popularity ladder.

Forget Covid for a while and enjoy the gusto and flashes of humour from the stony face of Yogi Babu and the noisy oubursts of Ilavarasu& family and many more.With Vinay Rai,another suave villain is born.Failed heroes at times make invincible villains.The names of Jai Ganesh and Srikanth of Vennira Aadai, could be recalled in this regard.

On the whole,'Doctor' is a 'boon show' of Siva Karthikeyan,to enforce comedy therapy for a speedy recovery from the Pandemic horrors.By the way 'Doctor' is branded as an action thriller too and the Climax proves it to the core. Nelson Dilipkumar has casually sewed the thriller component occupied in the faces of Siva Karthikeyan and Vinay Rai  with the humour bullets frequently shot by the spoken and silent drama of others in the cast.Anirudh's music breezily travels with the unique fusion of thriller and comedy.However,for the audience it might look like 'The Doctor's Dilemma' between humour and thriller { Doctor's Dilemma is the title of a famous play by George Bernard Shaw}