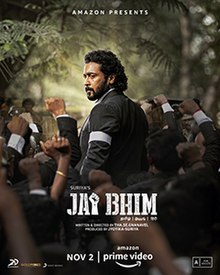 Tamil Cinema is reaching new milestones with a conscientious commitment to social realities,beautifully blended to the aesthetic norms of film making.One of the most pricking social realities is the continued inhuman oppression and brutality let loose against the socially down trodden,and callously victimized sections of humanity. While racial discrimination still prevails in certain parts of the world,caste humiliation and scant regard for the living rights of the scheduled tribes are the painful pitfalls of the Indian soil.

Jai Bhim cannot be called an eye opener of this predicament.It is rather a real life show shocking the nerves and emotions of the audience.An absolute salute to Suriya and Jyothika for taking up this most deserving plot for a gripping cinematic show under their production slot.Also an earnest tribute to T.J.Gnanavel  for making an amazing trip through the gruesome routine of the tribal humanity

Lijomol Jose as Sengeni  K. Manikandan as Rajakannu would keep knocking at the doors of our memory for a pretty long time.How much acting talent is lying hidden and how many more are there to pass on into the characters in flesh and blood,are left to those who are capable of tapping talents at the right time.Now T.J Gnanavel has been lucky to induct these two actors who keep us stuck to the Amazon Prime Show by their each and every word uttered and their profiles perfectly reflecting the tribal tribulations.

There are periodical shrieks and howls of the tribal women and kids transferring to the audience their anguish,coupled with the horror of illtreatment,in the hands of self centred and ruthless cops who can casually convert a custodial death into a death by accident.In a movie that can hardly entertain the viewers with its saga of suffering,Sean Roldan's music provides the soothing touches with the beautiful lyrics of Yugabharathi {Sendumalli, Vettakaara Koottam,Pollaadha Ulagathile and Mannile Eeramundu}& Raju Murugan {Thalakodhum}.Arivu's'power'song is a heroic number for a hero,who is clear headed in shunning heroism and hence the song goes anomalous to the narrative domain of T.J.Gnanavel,whose presentation of the story's events is down to earth.

Suriya's dedicated underplay of his role as advocate  Chandru fighting for justice,goes perfectly in sync with the dignified underplay of the role of an honest police officer by the never failing actor Prakash Raj.On the whole,Jai Bhim succeeds in knitting the course of events back and forth,with its seamless editing perfection.It will take a long time to push back the pain of watching the miseries of a section of humanity,undergoing the trauma of deprivation.

It is really a wonder that a film dealing with the darker side of police atrocities,keeps us glued to the screen from the start till the end.The initial scenes of elegant conjugal romance between Manikandan and Lijmol Jose as the tribal pair,are the redeeming moments of a film neatly bound to its gory side.As a woman of silent rebellion and subdued agony,Lijmol Jose will live long in our memory.Suriya and Jyothika have every right to feel proud of having raised Jai Bhim to the height of Jai Tamil Cinema.