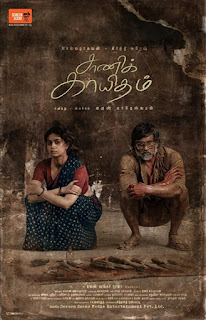 Caste aversions and a brutal mindset to dehumanise fellow human beings belonging to the oppressed lot,speak about the barbarity of mankind,despite years of civilization.The ordeals of a section of the socially abused lot,have already drawn the attention of Tamil cinema,through high quality films like Jai Bhim.Here comes the film 'Saani Kaayidham'released on Amzon Prime Video,a couple of days ago,re-emphasising the detestable theme of caste aspersion.

The theme of the film originates from a sectional feud,with which the movie begins in a mill,where  two guys belonging to a socially lower section working in the mill  are taunted and abused by way of asking them to clean the toilet.The wife of one guy is a police constable and the couple have a daughter.The follwing ruckus in the mill drives the abusing group to physically assault and collectively rape the woman constable. {amazingly portrayed by Keerthi Suresh}.The inhuman guys set fire to the house of the cop while her physically abused husband and their daughter are sleeping inside the thatched hut.What follows is a gory tale of revenge and virulent vendetta.

The physically and socially wronged woman constable,determines to return the brutality to the guys who ruined her life,along with the woman lawyer-relative of the gang,who planned the escape of the thugs from police custody.The mega revenge takes place with hithertoo unseen wrath,fury and ferocity.Incidentally,the woman avenger is joined in her mission,by her half brother Sangaiyya{convincingly played by film maker Selvaragavan}who had already become close to the cop's dead daughter and who has not been favourably entertained by his half sister.

Changed circumstances bring together the estranged half brother and half sister.The duo become the 'danger diabolic'for the thugs and the lawyer.How they carry out their revenge plot with full fledged rage and deadly art of killing,makes the viewers shudder at the course of events.Like the recently seen Prithiviraj Malayalam film 'Kurudhi' it is blood in every scene.The cry to kill,draws its force from the memory of the victimised woman cop. Her unquenchable thirst for revenge, makes every scene of murder a horridly shocking experience for the viewers.

There is not only a killer-fulfilment in the eyes of Keerthi Suresh in each act of killing, but also a craving to kill more violently.Perhaps it is this dreadful killing spree that drives her to the mass matador killing of a number of guys.Keerthi Suresh who got her deserving award for her fabulous role as actor Savithri in Mahanati,certainly deserves yet another award for her remarkable portrayal of the woman incarnation of inexhaustible revenge,that marks a tooth for a tooth,an eye for an eye and an irrefutable punishment for mass molestation.

We have hardly come across a terribly angered woman on the screem in the like of Keerthi Suresh!And no doubt Selvaragavan has comprehensively evolved from a director to an actor, with absolute commitment to perform the role of a passionate half brother and compatible partner of his half sister, in accomplishing the muddy task of revenge,on a Matador drive.Special credits to Arun Matheswaran and Yuvan Shankar Raja,for making the film create a muddy muddy world,as crude as possible,through effective narration,and background music score respectively.Thanks to Prime Videos too.