Homage to a 'Face Breaking' Comedian. 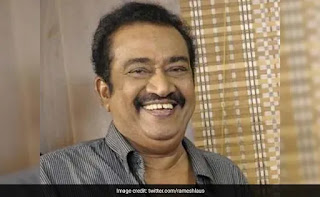 Second level comedians are many in Tamil cinema.Of these Pandu used to occupy a special space.He had been doing the rounds nearly for five decades,getting introduced to Tamil Cinema in the role of a student in Devar films' Manavan.Unlike his brother Idichapuli Selvaraj, who used to play notable character roles,Pandu did both comedy and character roles with a unique body language.In comedy roles his face would excel breaking its muscles into various proportions and his voice matching those lines drawn in different modes, almoast like the alphabets of facial language.His tone delivery would successfully fall in line with his face,spontaneously down loading crates of laughter.

Recently I saw Sundar C's famous film Ullathai Allitha in You tube and went on laughing in a non stop spree,on seeing the comedy ruckus that Pandu and Senthil would display with a bomb filled bouquet meant for killing their employer Manivannan,on the instruction of their boss,again Manivannan.{in dual roles}Ultimately, the bombed bouquet will bounce on them, ending up on a farcical note.

Pandu has acted in a number of films of which  besides Ullathai Allitha,Kadhal Kottai, Gokulathil Seethai,Murai Maapillai, Sundara Travels,Jodi,Lootty,Unnaithedi,James Pandu, Unnai Ninaithu,Ezhaiyin Sirippil and Ghilli need a special mention.Be it the role of a college Principal{as Hitler in Murai Maapilaai}or a cop{in several films}or an astrologer or doctor he played his role with an absorbing grasp of comedy sense or sobriety,needed for the context.He was always a highly acclaimed second level comedian like Madhan Bob who is known for his serial laughter loading the audience mood too,with serial enjoyment.

The pandemic fatally knocking at the doors of known and unknown persons,has been making a deplorable havoc.When it comes to disease and death celebrities and creative artists are no exception.We have lost another endearing face of Tamil cinema in this list.Apart from being an actor Pandu was also a designer artist with his creative sparks penetrating into the creditable formation of the flag for the AIADMK and in doing this he would certainly have been closer to the heart of Tamil Cinema's all time mass hero and mass leader MGR.It would be a happy day,if the cruel Covid 19 stops its destructive vigour soon and draws its curtains once for all. May Pandu's soul rest in peace.