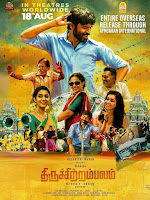 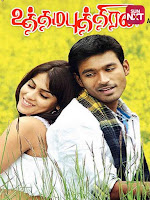 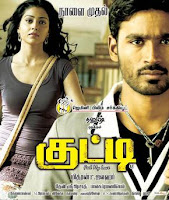 All the four drives of Mithran R.Jawahar with Danush were on the highways of romance with different exits as storylines. Romance is an eternally enthralling theme for Tamil cinema and many film makers like C.V.Sridhar,Rajiv Menon,Saran and several others have cast a magic spell of romance through each one's fascinating fantasies and exotic modes of narration.

Most of the roles fitted into the profile of Danush in many of his earlier films,reflected the image of a wayward and unruly son with lack of education,surpassed by filial devotion.Mithran's first film Yaaradi Nee Mohini portrayed him as a stalker,falling in love with a woman senior to him by age.In that film Danush was a motherless son cherishing a secret love and respect for his father,which he would promptly disclose at a very delicate moment when the woman he loved, insulted his father.It was a unique father and son relationship between Raghuvaran and Danush.

The second film Kutty was again a love story putting Danush into the predicament of winning the hand of the woman he loved against several odds such as the woman not immediately accepting his love and another man more suitable to marry the woman,coming as the rival in romance.The film showed how competently Danush overshadowed his rival and ultimately won the heart of the girl,whom he ardently loved.This film of Mithran was only a moderate show.

Mithran's Uthama Puthiran was a hilarious parade in romance with the mutual contrivance of Danush and Genelia to win over the turbulent male heads of Genelia, who are bound to a rustic routine.A classic comedy element ran throughout the film,on account of  Vivek's unforgettable performance.The comedy ruckus would aggravate, whenever Danush would throw Vivek into the floods of amnesia.The family of Danush headed by Bagyaraj &co further enhanced the quality of humour,with an apt mixing of geniality to the ruggedness of Genelia's relatives.The comedy dharbar was made a mega show,thanks to the counter productive plans of Karunas and Mayilsamy that would fizzle out and backfire. Uthamaputhiran was a fine comedy in the line of Bama Vijayam and Galaattaa Kalyanam.This film was yet another big show of the duo Danush and Mithran. R.Jawahar.

Thiruchitrambalam,the latest drive of Mithran.R.Jawahar with Danush became a run away hit.Though it was yet another romance in the line of Yaaradi Nee Mohini, with Danush trying his luck for love,totally unmindful of the fact that he has the next door neighbour and bosom friend Nithya Menen,heartily in love with him,it was the other parameters of the film that made it closer to the hearts of many.

Thiruchitrambalam is a three generation tale throwing the third generation Danush in between his chummy grandfather Bharathiraja{how breezily the veteran essays his role!}and his estranged cop cum father Prakash Raj.Whenever friends call Danush Pazham{fruit} there flows a cheeky sense of humour in us.The success of Thiruchitambalam is its immaculately integrated subtle emotions and deeper layers of sensitivity.Danush is motherless as he was in Yaaradi Nee Mohini.But if the father and son relationship which was exemplary in Yaaradi Nee Mohini,it gets frequently derailed in Thiruchitrambalam,due to the mistaken notion of the hero,that it was the failed car drive of his father,that killed his mother and sister,in an accident. Finally,it is the paralyzed condition of Prakash Raj that strikes the hithertoo hidden bond between the father and son.

The most telling aspect of Thruchtrambalam is the portrayal of Danush as a failed romantic.He realizes rather too late,the fragrance of love of the flower that blossomed everyday at his own doorstep as his childhood friend Nithya Menen.This particular point would force us to recall the film Badri,in which the hero Vijay would not understand the love of his close friend Bhoomika and instead run after Monal.

Sometimes film makers are lucky in taking their film closer to the emotions of the viewers.Thiruchitambalam is one such film,a mascot adorning the shoulders of Mithran Jawahar,may be due to the fresh narrative mode of the film,activated by the enchanting role play of Danush,Nithya Menen and the profoundly endearing grandpa,shuttling his routine,much against his age,between his ruffian grandson and rough and tough son.To complete this post,let me say a "hats off"to Mithran Jawahar,for his dedication to the narration of romantic tales,without deviating at any time,from the core values of steady family routine and steadfast romance.